During his visit, Commodore Bethel and General O’Shaughnessy discussed security issues of interest to both The Bahamas and the United States. The General was also taken on a tour of Coral Harbour Base and the Legend Class vessel, HMBS Livingstone Smith.

General O’Shaughnessy and Commodore Bethel also signed an Acquisition and Cross-Servicing Agreement (ACSA) on behalf of the Ministry of National Security and the US Department of Defence, respectively.

ACSA is a bilateral agreement between the US and The Bahamas authorizing the exchange or procurement of logistics support, supplies, and services during exercises, training, or emergency situations through the US Armed Forces and the Royal Bahamas Defence Force.  This now allows Defence Force vessels engaged in activities such as a hurricane avoidance operation to obtain goods and services through the armed services 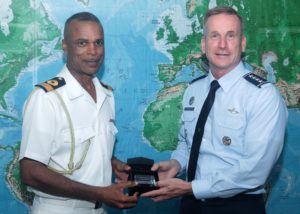 whenever Defence Force ships and aircraft visit US ports.

USNORTHCOM is a combatant command responsible for protecting the US Homeland, as well as US interests in Canada, Mexico and The Bahamas. USNORTHCOM has facilitated numerous military training programs for hundreds of Defence Force members. It has also organized law enforcement training for Police Officers.