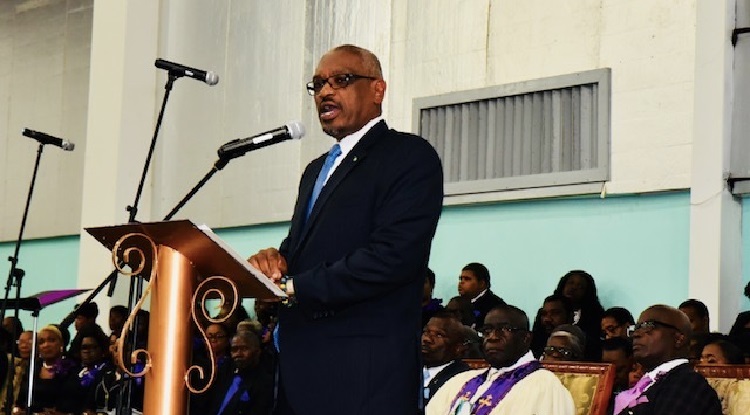 #Bahamas, May 31, 2018 – Nassau – Prime Minister, Dr. the Hon. Hubert Minnis said that in order for the least among the people to benefit, there must be a continued partnership between the Church and State.  He was addressing the Bahamas Baptist Missionary and Educational 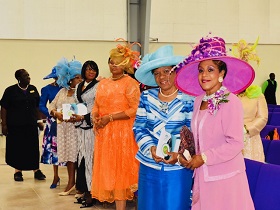 In attendance were Her Excellency Dame Marguerite Pindling, Governor General of the Commonwealth of The Bahamas, and other officials who assembled among the congregation in the William Thompson Auditorium on Tuesday evening, May 29, 2018.

In congratulating the Baptist community on its stability, the Prime Minister said that the denomination has been a witness to the message of Jesus Christ throughout its history  He also acknowledged the positive impact the Baptist Convention, through its various ministries, has had on the lives of thousands of Bahamians over the years.

“You have also served through servant leadership and social outreach,” he said.  “And you know well the fundamental role of the church in the protection and respect for the dignity of the human person made in the image and likeness of God.” 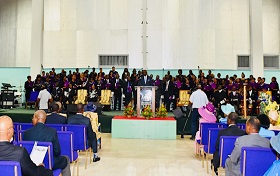 clothed me, I was sick and you looked after me, I was in prison and you came to visit me.”

The Baptist community, he said, has a legacy of promoting the common good and social justice.

“The promotion of the common good and social justice requires a sustained partnership between church and state.  We must work together, and work unceasingly, to address the needs of the poorest and most vulnerable in our land.

“The greatest privilege of serving as Head of Government is the opportunity to improve the lives of my fellow-Bahamians.  It is a special privilege to work daily to provide our children and young people with opportunities to dream and to realize their dreams,” the Prime Minister said.

He said since coming to office in May 2017 he has a new vantage point to see, more in-depth, the challenges and problems as well as possibilities for the country.  However, the work of good governance requires tough and difficult choices, he noted.

He continued: “And there comes a time when one must take a position that is neither safe, nor political, nor popular, but he must do it because 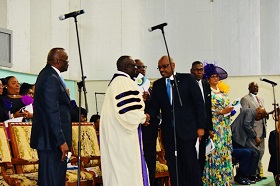 conscience tells him it is right.”

In order to restore our country and move it in the right direction, some tough choices have been made; and there are more tough choices ahead, the Prime Minister said.   “But in the end we will be a more productive, healthier and more vibrant country because the hard decisions were made.”

He said that his vision and commitment as Prime Minister is to help the Bahamian people, especially the young people, with the resources and opportunities they need to build a good life and a better Bahamas.

These resources include education, health care, social development and economic opportunities including jobs and opportunities to become entrepreneurs and business people, he said.