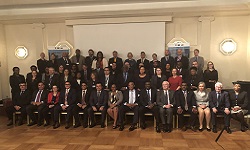 #TurksandCaicos, March 2, 2018 – Providenciales – The Turks and Caicos Islands (TCI) Premier, Hon. Sharlene Cartwright-Robinson along with a delegation consisting of the Deputy Governor and EU Program Manager, Her Excellency Anya Williams, Permanent Secretary of Finance, Athenee Basden, Director of the Office of the Premier Ronlee James, TCI UK Representative and Head of the London Office, Tracy Knight and Consular Officer, Kimo Tynes attended the Ministerial Conference of the Association of Overseas Countries and Territories of the European Union (OCTA) and 16th annual European Union Overseas Countries and Territories Forum in Brussels, Belgium on the 22 and 23 of February, 2018.

The Turks and Caicos Islands has had a long relationship with European Union and as such the islands have significantly benefitted in expertise, advice and financial assistance over the years.  The TCI most recently benefitted from two European Development Funds (EDF) 10 and 11 and is also a participant in several Regional EU Programs.  Under the EDF 11 Program, which is focused on improvements in the education sector and sustainable energy, marine biodiversity, climate change and disaster risk reduction.

Commenting on the EU Forum and the continued partnership between the TCI and the EU, Premier Hon. Cartwright-Robinson said; “The Turks and Caicos continues to benefit over the years from funding through the European Development Fund programme, but moreover, the past several days spent with fellow OCTA Leaders and Representatives as well as European the Commission, signify to me their commitment to issues we face both collectively and individually.  It has been a rewarding year as Chair of OCTA and we look forward to continuing our relationship, building on the successes we both share.”

“Last year on assuming the Chair of OCTA, I outlined that one of the main areas my government would be focused on is the environment and renewable energy for the long-term protection, survival and vitality of our marine and eco environments and I was pleased to report on the success we have had at that, particularly in light of experiencing two major hurricanes in 2017.   But my governments commitment doesn’t end there.  I remain steadfast to the issues around Climate Change, a specific concern to all members of OCTA and which remit falls under my office, as we have begun to identify initiatives that will lower our carbon emission and footprint and increase our adaptability.” 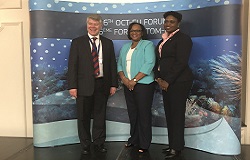 Deputy Governor and EU Program Manager Her Excellency Anya Williams added; “As the European Development Fund Program Manager for the past five (5) years since the Turks and Caicos Islands was reinstated into the program in 2008, I am happy to report that the TCI currently manages one of the most successful EU programs in the region.  Programming Documents for the 11th EDF which focuses on the Education Sector were the 2nd in the region to be signed at the 15th OCT Forum held in Aruba in February 2017 and work is already well underway through the development of a new Education Sector Policy, the tendering of the construction of a new primary school on the island of Providenciales and a number of key strategic reforms in the education sector.

“We are grateful for our continued partnership with the EU and for the early release of the first tranche of $4m under this program which was received shortly after the passage of hurricanes Irma and Maria in September 2017 to assist with any potential cash shortfalls.  The Turks and Caicos has already submitted an application for emergency relief funding under the EDF 11 B Envelope to assist with rebuilding works required in our education sector and is also a part of the Regional Program which will be focusing on Renewable Energy and Marine Biodiversity, along with the Thematic Program which will be focusing on Climate Change.  We register our thanks to our technical team the PS Finance Mrs. Athenee Basden and Director of Strategic Policy and Planning Mrs. Kathleen Forbes (Deputy Program Manager) for their continued assistance in managing the EU work programs and along with colleagues in the Ministry of Education, Ministry of Infrastructure, Housing and Planning and Ministry of Tourism and the Environment look forward to even further progress on the EDF 11, Regional and Thematic work programs. 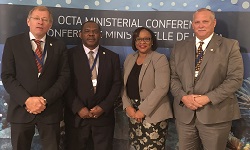 As the Chair of OCTA, the Premier was responsible for chairing the Ministerial Conference of OCTA and round table discussions, with her Ministerial colleagues.  This year, the TCI also participated in a one-day meeting on oceans organised by OCTA, under the theme “More than 17,000,000 Km2 of Ocean Policy: OCTs and the Sustainable Management of the Ocean and its resources.”  During that discussion, the Premier highlighted her governments challenges and commitment to the issues faced including: challenges with pollution, fisheries, new opportunities for blue growth and new opportunities for research.

It is customary for the Chair of OCTA to host a Gala Dinner in honour of the delegates, officials and guests who have travelled to the host country, or in this instance Brussels, for the auspicious occasion.  This year the Premier, as Chair, brought some of Turks and Caicos’ s best cultural performers along with her to treat guests to a taste of TCI’s culture, with musicians Quinton Dean and Lindsey “Zeus” Butterfield, as well as London based students Renate Hinds and Mary Fulford who performed both songs and poetry.

At the conclusion of the week of meetings, French Polynesia was elected as Chair of OCTA and thanked the TCI for its leadership over the past year and welcomed all to Tahiti next year where the next OCTA Ministerial and OCT EU Form 2019.