Minister of State for Grand Bahama, Senator Kwasi Thompson said that this year there would be an increase in school participation, as students from East End Junior High School and Pine Forest Academy got a chance to be a part of the Fifth Annual Grand Bahama High School Industrial and Technical Career Fair at Grand Lucayan, March 15-16, 2018.

Minister Thompson noted that the Career Fair would go a long way in helping establish Grand Bahama as a Tech Hub. He said that Grand Bahama is suited to becoming the Silicon Valley of the Bahamas and the Caribbean Region.

“Therefore, we can expect an upcoming shift in the job market, as this island becomes the premier place for cutting edge technology ventures and businesses,” said Minister Thompson.   “It will become critical to adequately prepare our workforce to capitalize on the new opportunities.

“Further, this government remains cognizant of unemployment challenges, therefore, we have set out to provide the support and training necessary 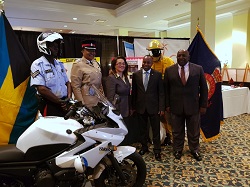 to make the pursuit of dynamic long-term careers and entrepreneurships achievable.”

As hundreds of young people are set to enter the workforce in the near and distant future, Minister Thompson said the government seeks to show, through the continuation of the annual technical and industry career fair, the importance of exposing young people to the wide range of opportunities and industries.

The event has been organized by the Office of The Prime Minister in Grand Bahama and the Ministry of Education, Science and Technology. Students from 19 private and public high schools are exposed to the major industrial and technical organizations in Grand Bahama.

Some 2,000 students in grades nine through 12 meet personnel from over 30 businesses and organizations on the island, learn about existing careers and future career trends in various fields in both public and private sectors.

Insert: Minister of State for Grand Bahama, Senator Kwasi Thompson (second from right) and Permanent Secretary in the Office of the Prime Minister, Harcourt Brown (right) stand with some of the representatives of organizations that took part in the 2018 GB High School Industrial and Technical Career Fair, held at Grand Lucayan.