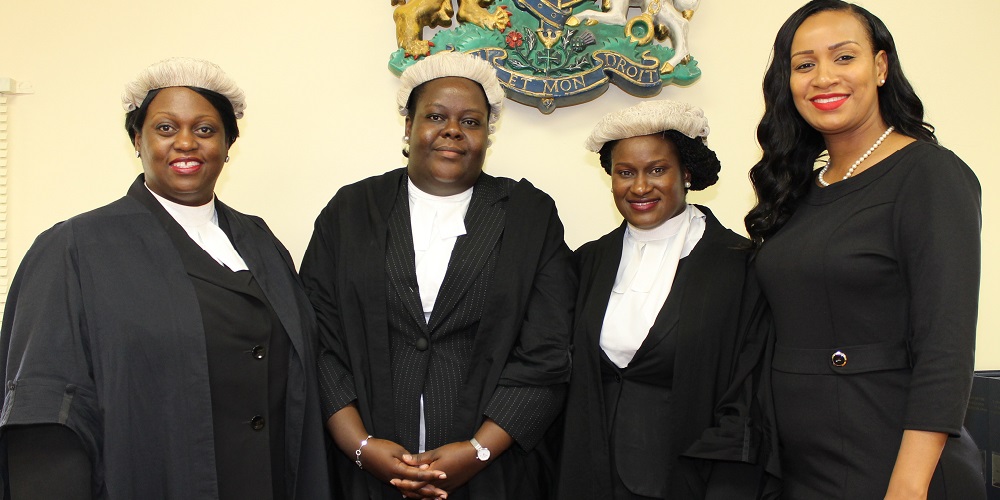 #TurksandCaicos, January 11, 2018 – Providenciales – The Turks and Caicos Islands Attorney General’s Chambers is pleased to announce the appointment of Ms. Chassidy Swann to the post of Crown Counsel and Mrs. Shayone Handfield-Gardiner to the post of Senior Crown Counsel.  Ms. Handfield-Gardiner who previously held the position of Crown Counsel within the Attorney General’s Chambers, holds a LLB and a recently earned Master’s Degree in Law from the University of Leeds.

Commenting on her appointment Mrs. Handfield-Gardiner said; “I am humbled, yet proud to be working in a country where young women are encouraged to break glass ceilings and take on roles that were once only reserved for middle- aged men.   Given the great leadership of our Attorney General, I am delighted to have been appointed as the Senior Crown Counsel in the International Division of the Attorney General’s Chambers.

“Having worked in the Chambers since 2010, it is my earnest desire to continue to contribute to the ever-evolving demands and obligations of the legal industry in the Turks and Caicos Islands.  The law, like any living organism, must change or be updated as our communities improve.  The same way lawyers are meant to continuously update themselves to meet the demands of the legal profession.  It’s against this backdrop that I decided to return to the United Kingdom to read my LLM in International Law.   This provided me with the opportunity to improve my knowledge and skills thus making me a greater asset to Chambers. My commitment to the Attorney General’s Chambers and the Turks and Caicos Islands Government remains steadfast.

“The decision to return to school represented a considerable sacrifice of time away from work and my family as well as finances on my part.  However, I remain grateful to the Deputy Governor and her team as I was able to receive two $5,000.00 grants from the Professional Development Fund towards the cost of my studies.

“I wish to encourage my colleagues in the Public Sector to continue to explore funding opportunities such as the Professional Development Fund which provides financial assistance to enable you to excel academically in your desired profession.  Your commitment to your education serves also as a testament to your dedication to your personal development and which puts you in a better position knowledge- wise to serve your country.”

During the period 2013-2016, Ms. Swann worked as a Paralegal at Minnis & Company in the Bahamas before joining the Attorney General’s Chambers in September 2016 as a temporary Crown Counsel in the place of Mrs. Handfield-Gardiner who was on study leave at the time and was called to the TCI Bar in July 2017.

Commenting on her appointment Ms. Swann said; “I am very pleased to have been appointed Crown Counsel (Commercial/Civil) with the Attorney General’s Chambers.  I am confident that I will be able to make a positive contribution to the Chambers and remain grateful for the opportunity to do so.”

“Both appointments are part of my efforts at succession planning within my Chambers and these appointments are a testament to the solid work ethic of each counsel and their commitment to professional development.  Shayone having just completed her Master’s Degree in Law and Chassidy having recently been admitted to the TCI Bar (following her in service training in my Chambers) will be valuable assets to the Government in these new roles. Shayone joins the recently established international division and Chassidy joins the commercial division.”

Deputy Governor Her Excellency Anya Williams commended both ladies on their appointments and said; “It is with great pleasure that I take the opportunity to congratulate both Shayone and Chassidy on their appointments.  Shayone has been an ardent worker over the years and I commend her on her decision to upgrade her skills which assisted in her promotion to the role of Senior Crown Counsel. As she joins the International Division of the Chambers we will certainly miss her advice and guidance in routine TCIG matters, but am certain that she will do well.

“Chassidy during her short time with us, fully utilized her temporary employment to prove that a permanent place in the Chambers should be made for her and we are happy to have her and will certainly ensure that she is kept very busy!  Congratulations ladies on appointments well deserved!”

BAHAMAS: Pintard Said Connecting Displaced Young People to the Arts Can be Transformative