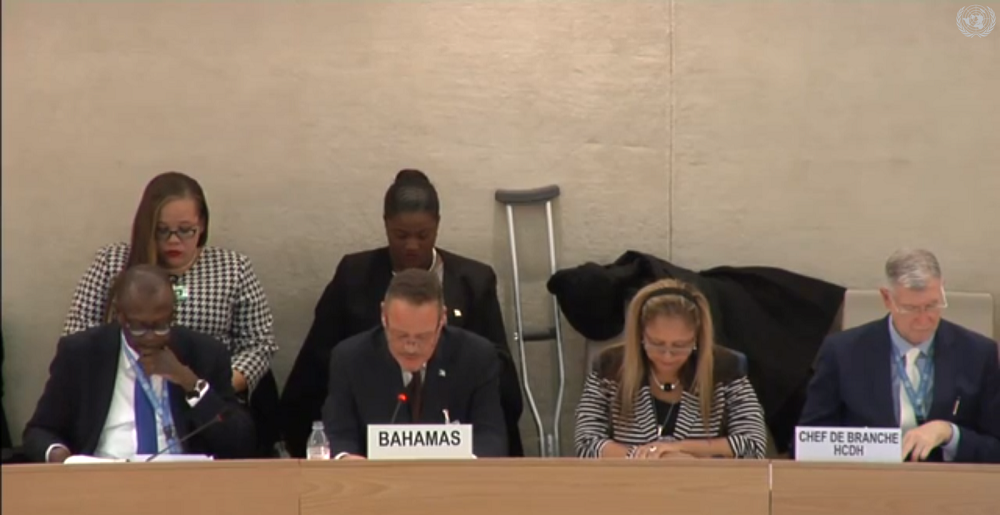 #UnitedStates, January 23, 2018 – New York City – The FNM Administration plans to even the law when it comes to the nationality of children born to Bahamians, the Attorney General during his report to the Human Rights Council of the United Nations last week said that what a 2016 referendum failed to do for equity’s sake, the Minnis Administration will do when it amends The Bahamas Nationality Act.

“The minor child of a Bahamian male or female, wherever born, in or out of wedlock, will be entitled to be registered as a Bahamian upon application by the parents.”

There have been mixed reactions to the presentation by Bahamas Attorney General, Carl Bethel who led a delegation at the Universal periodic review in Geneva, Switzerland.  The AG’s legal posture and comments on behalf of the Commonwealth of The Bahamas as it relates to hot button issues like marital rape and equality for transgender residents of The Bahamas was met with some backlash but equally interesting was his comments on how The Bahamas will now aim to deal with ‘statelessness’.

“The Government plans to introduce an Independent Review Committee chaired by a retired Chief Justice, to review all pending applications for citizenship in an effort to clear the enormous backlog that currently exists, allowing those applicants who qualify for citizenship to receive and enjoy the citizenship promised by the constitution.  The committee will make recommendations in all cases to the immigration board and the minister, which recommendations will ordinarily be followed, unless there are compelling reasons of National Security or public safety.”

While the Attorney General on Jan 17 2018 reported on progresses like criminal cases more quickly reaching trial stage, cut down from a year to two months, he also reported on challenges including improvements necessary at the migrant detention center and highlighted areas where Bahamians were not culturally or democratically prepared to budge.   Among them: capital punishment, the death penalty will stay as Bahamians see it as lawful though an execution has not happened in 17 years … and corporal punishment which will remain legal within schools and homes once reasonably carried out.