#TurksandCaicos, December 26, 2017 – Providenciales – In a surprise move at the PDM Administration’s one year report press conference, there was a presentation to the premier,  finance minister  and People’s Democratic Movement party leader, Hon Sharlene Robinson. 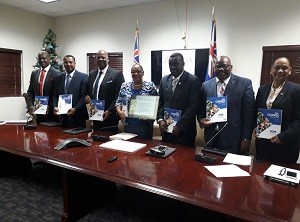 “The elected members from your team have watched you during the campaign and over this last year, and your leadership not only in government but also in our political party and wanted to give you something, you have been giving of yourself and this country for a very long time, and we’ve decided that a small token of appreciation and admiration that we have for you, that we should display it here in live color in front of the whole Turks and Caicos and let you know that we love you, we appreciate you, we really do appreciate the work that you do and the selflessness in the way that you do it.  And with that we would like to give you this little commemorative gift as a small token of our appreciation and love.”

Flanked by her Cabinet and two other elected members, the country’s first female premier was all smiles and equally as grateful for being singled out at special.

“I couldn’t have asked for a better team to work with, I mean I know sometimes I do breathe down their necks a bit, and I would like to say thank you to each and every one of the ministers and to say to Turks and Caicos why they are the best.”

The PDM on December 20 celebrated one year of being sworn into office as Government of the Turks and Caicos Islands after a resounding win at the polls on December 15, 2016.