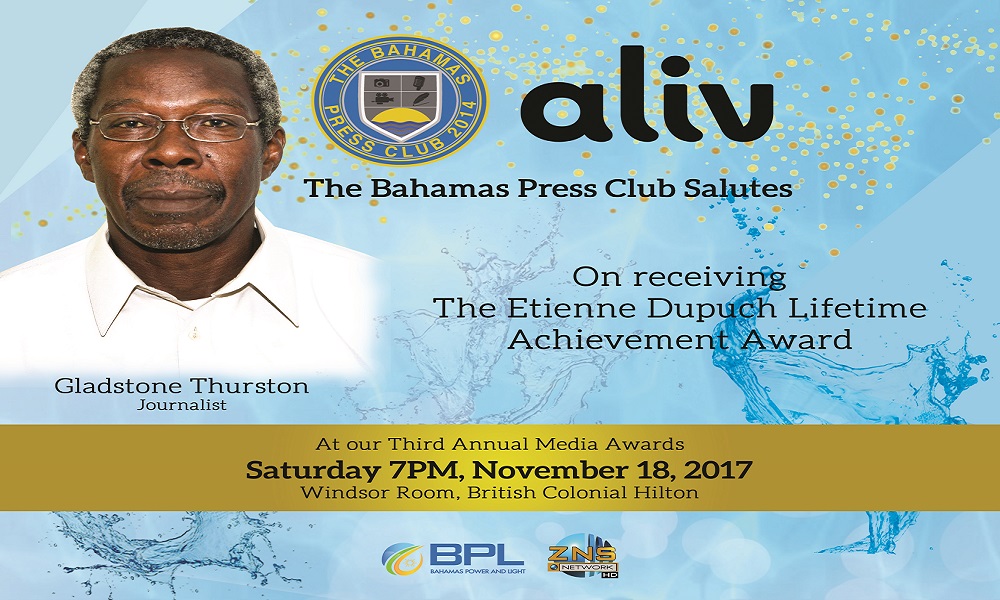 The Black Tie event is being held under the patronage of Her Excellency Dame Marguerite Pindling, Governor General of the Commonwealth of The Bahamas. Dr the Hon Hubert A Minnis, Prime Minister, will deliver the keynote address.

Rising from a cub reporter at The Tribune to the first managing editor of The Nassau Guardian, Gladstone Charles Thurston has left an indelible mark in Bahamian media.  This veteran reporter has written for many international and Bahamian newspapers and magazines.  Although retired from the profession, Mr. Thurston still writes from his home in Salt Pond, Long Island.

Mr. Thurston’s journalism profession began in 1974 following an interview with Eileen Carron, editor and publisher of The Tribune.  At that time, he was in search of a challenging career, one that he can be proud of and devoted to.

Mrs. Carron saw Mr. Thurston’s potential and tutored him in the art of gathering, presenting and disseminating information.  He became a sports reporter at The Tribune, covering many sporting events such as basketball, baseball, chess and pool.   He became known as “Mr. Sports” and was ringside when Bahamian boxer Elisha Obed won the world boxing title in Paris, France.

Also during the early days of his career, Mr. Thurston drew on the expertise of The Tribune’s senior reporters Nikki Kelly and Mike Lothian and the newspaper’s British editors, who were all anxious to assist anyone interested in learning the art of news reporting.   He later advanced as The Tribune’s court reporter and diligently covered the landmark Thomas D’Arcy Ryan citizenship case and the political fallout from the justices’ rulings.

As his reporting skills grew, his assignments did too, and during the 1977 general elections, Mr. Thurston entered the realm of political reporting.  This leap in his career introduced him to parliamentary reporting where he covered the House of Assembly and the Senate, documenting the country’s legislative business.

In an effort to provide the same mentoring that was given to him as a cub reporter, Mr. Thurston taught other upcoming journalists who entered The Tribune’s newsroom and in a de facto fashion, he was placed in charge of the newspaper’s training program.   After almost 20 years at The Tribune, Mr. Thurston left his home base and traveled to The Nassau Guardian and its subsidiary The Freeport News.    He provided exemplary service and as a result, former Nassau Guardian publisher Kenneth Francis promoted Mr. Thurston as the newspaper’s first managing editor.

Later, Mr. Thurston and veteran journalist Dudley N. Byfield launched The Grand Bahama Sun.  Then 10 years later, Mr. Thurston was hired as a Senior Information Officer at Bahamas Information Services (BIS).   He remained at BIS until he was offered early retirement after taking a stand against cronyism in government.   A widower, Mr. Thurston was married to Naomi Helen, née Moss, and he is the father of four sons  – Stanley, Patrick, Earl and Arthur.