#Bahamas, October 16, 2017 – Nassau – PLP Leader Philip Brave Davis took his ‘Road to Convention’ to a special conclave hosted by the New Providence Women’s Branch of the PLP on Saturday, October 7th at Sir Lynden Pindling House.   After spending most of the day travelling with Mr. Davis, the first female Deputy Prime Minister Cynthia ‘Mother’ Pratt was also in attendance at the conclave.   Mother Pratt shared a tearful story of the love, friendship, and kindheartedness of Party Leader Davis, who, she related, had come to her rescue in her most difficult time.

As Mr. Davis took the podium with cheers from supporters, he began by celebrating womanhood as he went on to describe women as “Strong, resourceful, resilient, wise, loving, tender and nurturing are all words to describe women, whom God designed to be the equal counterparts of man.” 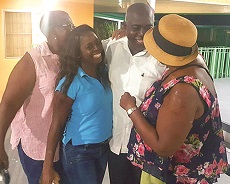 For the past few weeks, the Party Leader has made campaign stops in his “Road to Convention” travels across the country, sharing his message to rebuild and renew the PLP.

“I am committed to the PLP!  I believe in our party.  I believe we are the best vehicle to bring about real change and progress for our people.  Our core values are as relevant today as they were 60-plus years ago,” Davis told the women of the party.

Outlining his plan for the organization moving forward, Mr. Davis told the women supporters gathered, “I pledge to ensure that the Women’s Branch receive an annual stipend from the Central Party.   The work of the Women’s Branch is fundamentally important to the effectiveness and future success of the Party.”

Mr. Davis also announced his commitment to young Bahamians, ensuring that particularly women are adequately represented in his parliamentary team.    “The Parliamentary team of the PLP acts as its standard-bearer in the public and is in effect a representation of what we claim to be.

“We must ensure that women and young people are active leaders and participants on this team so that we reflect the reality of the current demographics of The Bahamas.”

Assuring supporters that he intends to lead a Party with a united voice, Mr. Davis added, “…we must restore and maintain discipline and order among the rank and file of the membership of the PLP.

“As a priority, I will, as your Leader, ensure that the Party speaks with a common voice and approaches the next election with a singular purpose.”

Mr. Davis’ remarks were received with thunderous applause and loud shouts by delegates attending the conclave to “Be Brave”!