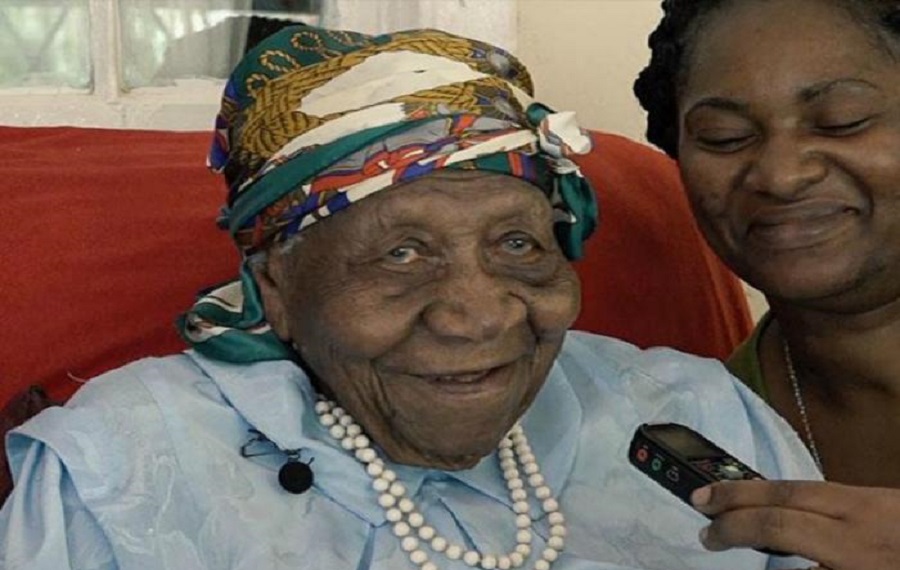 #Jamaica, October 11, 2017 – Montego Bay – It was not the usual funeral service.   No hushed solemn stillness, visible tears or wringing of hands.   Just laughter and the sharing of heart-warming memories as family, friends and well-wishers from all across Jamaica gathered at the Duanvale Baptist Church in Trelawny on October 7 to celebrate the life of Violet Moss Brown, who was known simply to the people of Duanvale as “Aunt V”.   The large crowd spilled from the halls of the church into the yard, with some persons accommodated in a tent erected outside.

Formerly the world’s oldest person, Mrs. Moss Brown, who at age 117 was recognised by the Guinness Book of World Records as the oldest person alive, died on September 15, closing a chapter on a life that has been a witness to history – two world wars and the golden age of Queen Victoria.

“My grandmother epitomised the meaning of the word love,” said Lilieth Fairweather, granddaughter and director of the Violet Moss Brown Foundation.

“She was a unifier, not a divider. She was a musician, who played the organ here in this church for 40 years,” she noted.   She said the world has lost “a real beacon of hope… a shining light on the hill… someone who knew how to work a room and make everybody happy”

Ms. Fairweather’s father and Mrs. Moss Brown’s son, Harland, passed earlier in the year at age 97, and was at one point the oldest living person, who had a parent alive.

For Andrew Whyte, who met his great-grand-aunt only once for her birthday back in April, said “it was amazing that at 117 she still had all her faculties intact”.

“I live in England, and so I came down with the rest of the family to celebrate Aunt V’s birthday.   We were all in the room when she gathered us all around and prayed for us as a family.   I playfully gave her my wallet and asked her to pray for it also.   She was very jovial and was also very happy about meeting my children.   I remembered her singing the song ‘I am blessed’ all the time,” he recalled.

Raised by Christian parents, Mrs. Moss Brown, in addition to being the church organist, was a music teacher for more than 80 years.   After her husband’s death in 1997, she took over his responsibilities and became a record keeper for the local cemetery, a job she continued well beyond her 100th birthday.

“She has witnessed a lot of what you would call historical events,” noted grand-niece, Dr. Vanilyn Brown-Daley.   “She also loved to tell stories, especially about Queen Victoria and the two world wars.   She also used to tell us about the thrills of seeing a car and an aeroplane for the first time. Even at 117, she also would take a sip of red wine every now and again,” she laughed.

Dr. Brown-Daley added that Mrs. Moss Brown never forgot her very humble upbringing and was a stickler for discipline and good manners.

“She didn’t have it easy growing up, but she never used that as an excuse. Even until the very end, she loved to read her Bible and knew the scriptures well. She was also very fond of her Church and remembered names very well,” she said.

For her part, Minister of Culture, Gender, Entertainment and Sport, the Hon. Olivia Grange, who was representing Prime Minister, the Most Hon. Andrew Holness, told the gathering to remember “Aunt V” for the spirit of love she embodied throughout her life.

“Don’t matter what your differences are, just take a page out of Aunt V’s book and remember how she has lived her life. And so I make a special appeal to you, make her proud, make Jamaica proud.   And don’t do anything at all that will make you or anyone else ashamed,” Ms. Grange appealed.

In April, Mrs. Moss Brown became the world’s oldest living person following the death of Italian Emma Morano in April 2017.   On September 3, she was visited by representatives of the Guinness Book of Records, who presented her with a citation and the 2018 edition of the book.

Her body has been donated to the University of the West Indies (UWI) for scientific research.