#Bahamas, October 25, 2017 – Nassau – The Government of The Bahamas’ immigration policy is not based on any one individual group of persons residing locally, but about individuals from “all countries” who are here illegally, Prime Minister, Dr. the Hon. Hubert A. Minnis said Sunday.

Prime Minister Minnis also announced that Administration officials will create an Independent Commission to approve applications for citizenship in accordance with the Constitution “and our laws” to avoid any potential political interference.  Responsibility for the approval of applications for citizenship will be removed from the Cabinet, except for cases of national security.

“This includes individuals from the Caribbean, South America, Central America and North America.   The policy is also concerned with Bahamians who illegally employ individuals from anywhere in the world,” Prime Minister Minnis added.

Addressing worshipers attending the Sunday, October 22, 2017 morning service at the Metropolitan Church of the Nazarene, Prime Minister Minnis said The Bahamas must be a country that upholds its laws.   The Prime Minister said the Government will be just, and humane, in upholding all of the country’s laws when it comes to immigration matters.

Administration officials, Dr. Minnis said, will act in accordance with the Constitution of The Bahamas and the demands of human dignity and social justice to grant residency and citizenship to those eligible individuals who qualify for such status. 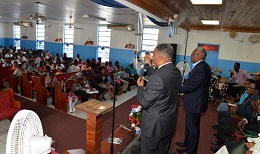 “We must be fair and just towards those who have contributed in so many ways to The Bahamas.   This means we must be fair in terms of our immigration practices and policies.   It is not fair, nor just, for so many of our young people to be marginalized, isolated or placed in no man’s land (stateless). Many cannot open bank accounts, attend universities, or travel, in spite of finishing our High Schools and in some instances, performing at the top of the class.

“My Government will act in accordance with our Constitution and the demands of human dignity and social justice to grant residency and citizenship for eligible individuals who qualify for such status.

Photo caption: Prime Minister Dr. the Hon. Hubert Minnis, centre right, shakes hands as he enters Metropolitan Church of the Nazarene, and behind is Minister of Transport and Local Government the Hon. Frankie Campbell.  They both take the podium to address the church audience, with the Minister of Transport assisting in Creole for the benefit of the audience.