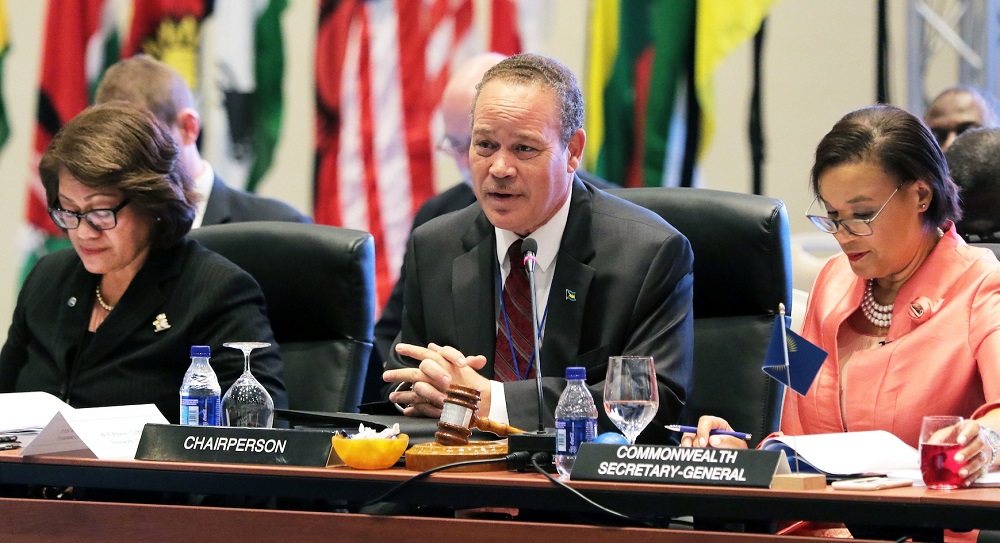 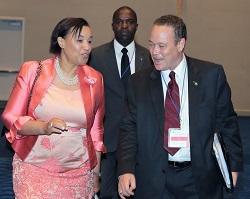 #Bahamas, October 19, 2017 – Nassau – After the first day of deliberations, the 2017 Commonwealth Law Ministers Meeting (CLMM) yielded its first accord, with establishment of the Office of Civil and Criminal Justice Reform on October 17, 2017 at the conclave at Baha Mar Convention Centre.   It was an idea that the Commonwealth’s Secretary General, the Rt. Hon. Patricia Scotland, Q.C. [Baroness], had since she was appointed in April 2016.

The new “Office of Civil and Criminal Justice Reform” is a high-level crime-fighting vehicle.   It is governed by the Declaration of the Charter of the Commonwealth of Nations, signed by H.M. The Queen, Elizabeth II, under which 52 nations are united by language, history, culture, and the shared values of Democracy, Rule of Law, International Peace, Freedom of Expression, Separation of Powers, Good Governance, Protecting the Environment, Access to Health, Education, Food and Shelter, Gender Equality, and Human Rights.

Since 1931, the members of the Commonwealth of Nations have formed a network in a spirit of cooperation, partnership, and understanding.

Baroness Scotland said: “It’s clear that one of the things that joined all of the 52 member states of the Commonwealth — which represents about 2.4 billion people, 60 percent of whom are under the age of 30 — was the Common Law.   We have a common language, a common Parliamentary system, and common institutions.

“The question therefore is: Look at the challenges that all of our countries face — the legal challenges, whether in relation to criminal justice, civil justice issues, particularly in terms of trade, but also climate change, and a plethora of other issues; we are all therefore, all our countries, looking at the same issues; none of us have sufficient resources to do it on our own –could we create something which will pool the opportunities to share our best practices and our learning?”

The Office of Civil and Criminal Justice Reform was created as an answer to the question.

She continued, in this office, which will be on the web: “you will see the laws and the procedures adopted and used by all our 52 member states.  The Office of Civil and Criminal Justice Reform creates a portal which will enable various member states to assist each other in terms of producing toolkits, common legislative programs, frameworks for legislation, but also work in practice.  This is a very important moment for us to help save money, save time; and, if we are correct in the way we deliver it, I think we will save lives as well.” 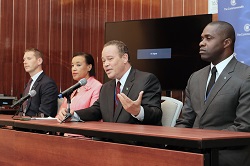 Bahamas Attorney General and Minister of Legal Affairs, the Hon. Carl W. Bethel said the conference was extremely enlightening, covering a plethora of topical issues including, local and international, for example, the application of technology in the fight against crime; issues of combating terrorism and terrorist financing; issues in terms of how do we prevent the radicalization of our young people.

“We live today in a very violent society on the streets with drug gangs, but we’ve had drug gangs for 30 to 40 years, but never had this level of violence.   So, how do we prevent the continued radicalization of even distressed young men in depressed communities? …These are problems that other countries in the Commonwealth face as well, and they’re grappling with the same issues.”

The Attorney General further stated that “the Commonwealth has always been a vital tool for those English-speaking or former English dominions or colonies which have embraced the Parliamentary system to share ideas and best practices.”

He continued that with the development of the new website, the ‘Office of Civil and Criminal Justice Reform’, there is “the ability for real time communication throughout the Commonwealth with our colleagues on critical issues.”   The Attorney General explained, “with this website now, I am able to access that portal, make contact in real time, obtain technical assistance with other Commonwealth countries that we also have certain similar initiatives with, and also in the U.K. with their Parliamentary persons.” 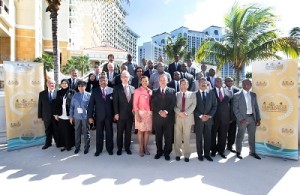 1st insert: Secretary General of the Commonwealth of Nations, Baroness Scotland chats with Bahamas Attorney General & Minister of Legal Affairs, Senator the Hon. Carl Bethel during the 2017 Commonwealth Law Ministers Meetings (CLMM) at Baha Mar, October 16-19, 2017.  Photos show events on Tuesday – also of the law ministers group and some of the proceedings.