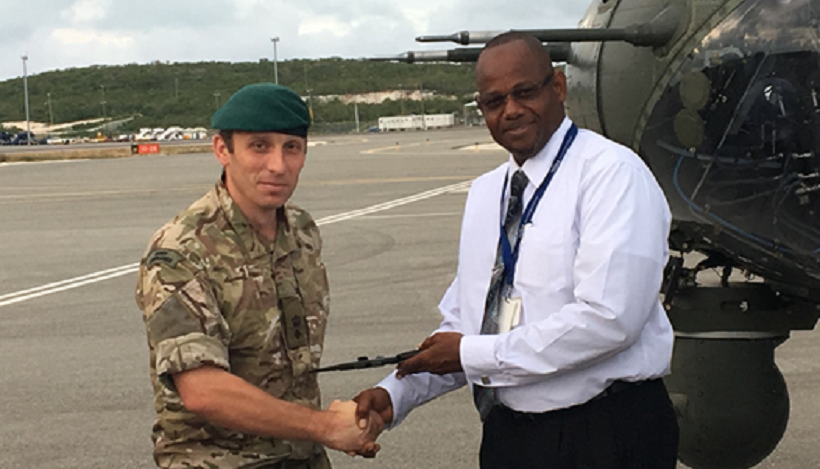 #TurksandCaicos, October 3, 2017 – Providenciales – John Smith, the CEO of Providenciales International Airport, was awarded a ceremonial Commando knife by the grateful UK troops who have been using PLS for the past weeks.

On Monday, at an evening ceremony held in front of one of the British military’s helicopters currently at PLS, Governor Freeman thanked Wing Commander Phil Wadlow for the work he and his men had done moving people, stores and supplies around the Turks & Caicos Islands.  Wg. Cmdr. Wadlow in turn thanked Mr. Smith for his generous assistance, and the vital use of the airport given to the British forces.

“It was an honour to come out here and be able to help.   We would not have been able to get anything done without the very generous use of the airport and facilities here, which have been absolutely fantastic”, said Wg Cmdr. Wadlow 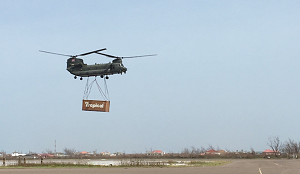 He was followed in thanking Mr. Smith by Lieutenant Colonel Tom Salberg, who has been based at the airport during the post-hurricane relief effort.   Lt. Col. Salberg took the opportunity to present Mr. Smith with a ceremonial Commando dagger, an emblem of 3 Commando Brigade, of which Lt. Col. Salberg’s men are part.

“It’s been a privilege to work side by side with the TCI people to help the relief effort after the recent hurricanes.    The airport has been a vital location for us and we wanted to say our thanks before my team leaves TCI, and is replaced by a smaller team of specialists who can help with longer term recovery”, said Lt. Col. Salberg.

“This dagger is a small, and sharp, symbol of our thanks”, he added.

1st insert: The group at the evening ceremony