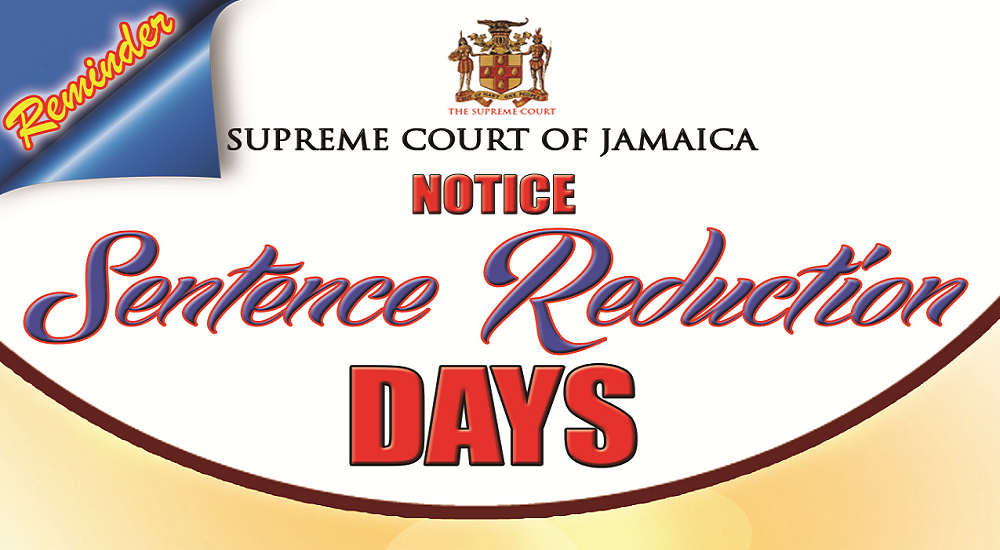 #Jamaica, October 18, 2017 – Kingston – Attorneys and accused persons are being strongly urged to take advantage of the Supreme Court’s second installment of the Sentence Reduction Day initiative on Thursday and Friday this week.   On October 19, the programme will be made available at the Home Circuit and Gun Court Division of Kingston and St. Andrew, and on October 20 at the St. Catherine Circuit Court.

The Sentence Reduction Day initiative provides an opportunity for accused persons to enter a guilty plea and benefit from a maximum of up to 50 per cent reduction in their sentence, according to the provisions of the Criminal Justice Administration Amendment Act, 2015.

In an interview with JIS News, Deputy Registrar with the Criminal Division of the Supreme Court, Tamsyn Bailey, said while an accused person can normally benefit from a reduction in his sentence under the legislation, he would have to make the plea by a specific time in his case.

“If they missed the opportunity when they would have been entitled to that 50 per cent discount, on the [Sentence Reduction] days, they have [a second chance].   Even on the day in question, if persons wish to plead guilty, they will be allowed to do so,” she said, adding that the amount of reduction in the sentence will be dependent on the circumstances of the case.

“I would implore accused persons, if you are guilty, to avail yourselves of this opportunity,” she urged.

The Sentence Reduction Day programme, first done on May 22, is being implemented by the Criminal Case Management Steering Committee, which has as its mandate the implementation of policies and strategies that are geared towards the administration of justice in a timely manner in all the courts.   The initiative was implemented as a measure to reduce the large number of cases pending trial.

Deputy Director of Public Prosecutions, Andrea Martin-Swaby, cited the value of the programme to the reduction of the backlog.   She said the Home Circuit Court, which serves Kingston and St. Andrew, has in excess of 800 cases awaiting trial, while the St. Catherine Circuit Court Division has in excess of 400 cases.

“Entering a plea of guilt has always been viewed by the courts as a sign of remorse, and the court has always, in my experience, been lenient to the sentencing of persons who plead guilty,” she said.

Mrs. Martin-Swaby noted that several factors are taken into account when sentencing, and that there are other options outside of prison terms available to the judge, such as a suspended sentence, probation or a monetary fine.

Through his attorney, an accused person can indicate his intention to utilise the initiative to the registry of the Home Circuit and Gun Courts or the Criminal Registry of the Supreme Court, and to the clerk of the court at the St. Catherine Parish Court before 10:00 a.m. on the day.

The Sentence Reduction Day programme is expected to be eventually rolled out at courts in all parishes.