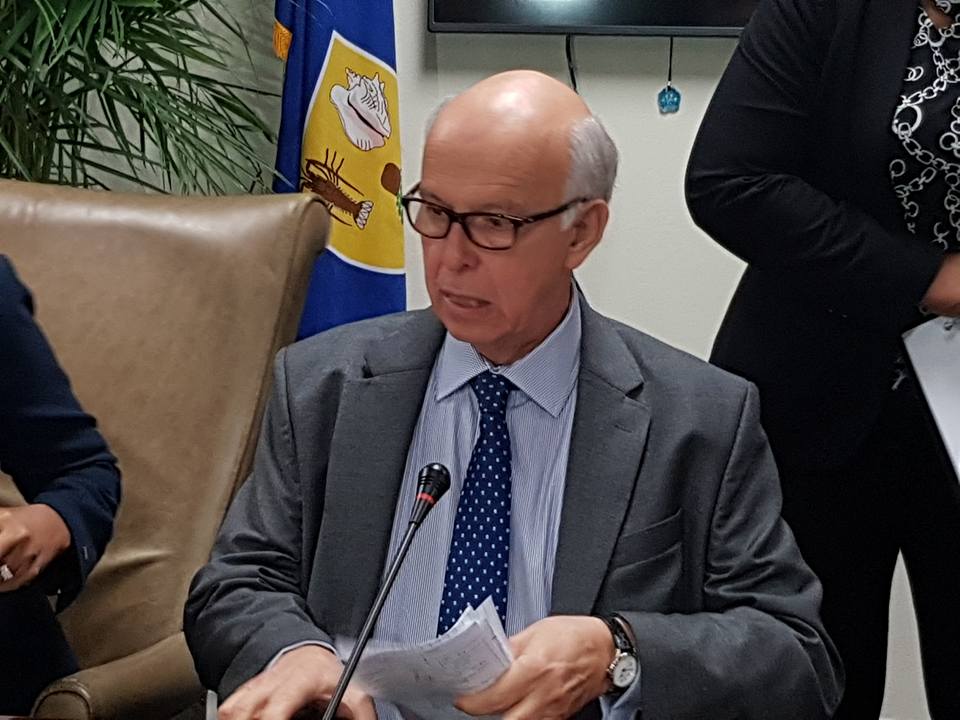 Turks and Caicos, September 5th, 2017 – Providenciales – Schools and offices will be closed on Thursday.  An evacuation order for Salt Cay will be given today.  Merchants are warned against price gouging.  Storm shelters are listed and evacuation routes identified.  An amnesty period is on for illegal migrants and the DDME is identified as the real source for storm information related specifically to the Turks and Caicos Islands.
Magnetic Media was among the media houses at the Office of the Premier on Monday afternoon where country leaders spelled out what the nation is facing as we prepare for Hurricane Irma.
Governor John Freeman stated, “I anticipate issuing an evacuation order for Salt Cay tomorrow morning and there will be advice provided in terms of low-lying areas also fairly rapidly to make sure that people are alert as possible.”
In addition, Dr. Virginia Clerveaux, Director of DDME explained, “From a category 3 storm, you’re looking at a very strong storm and based on the shifting of the storm moving slightly south, we’re now expecting to either get the storm passed directly over us or to have the righter bands affecting the Turks and Caicos Islands and what the experts in the field are saying is that the righter side of the storm, the right bands, are actually stronger. “
Deputy Governor, Anya Williams also added, “as it currently stands, the prediction from the Met office is that by Thursday morning we we should start to see some changes in the weather and then we should have hurricane impact winds and so on on Thursday evening. If that is the case we will be looking at winding down services possibly as early as Wednesday evening so that persons have enough time to be in their own communities and to prepare for the storm. “
The Minister in the Ministry of Home Affairs, Delroy Williams had strong advice for the public stating, “We would like to urge all residents and businesses not to take the storm lightly. Prepare yourself. The director have given you a list of all the shelters in the area. What you should do is to take keen notice of which shelter is nearest to you. Prepare yourselves, have a family evacuation plan.”
Premier Robinson then added, “And while you’re looking out for your employees please look out for those persons who will be purchasing merchandise from you. It’s important that we continue to say that we don’t have price control in Turks and Caicos but we can have price gouging and we really want to encourage you to not engage in that sort of activity over the next few days.”
Another debrief with the media is set for Wednesday as the Governor Dr John Freeman, Deputy Governor Anya Williams, Premier Sharlene Robinson, Minister of Home Affairs Delroy Williams and DDME Director Dr. Virginia Clerveaux all continue with stakeholder meetings for the next three days.  Again schools and government offices will be closedThursday to brace for Hurricane Irma.
By Deandrea Hamilton