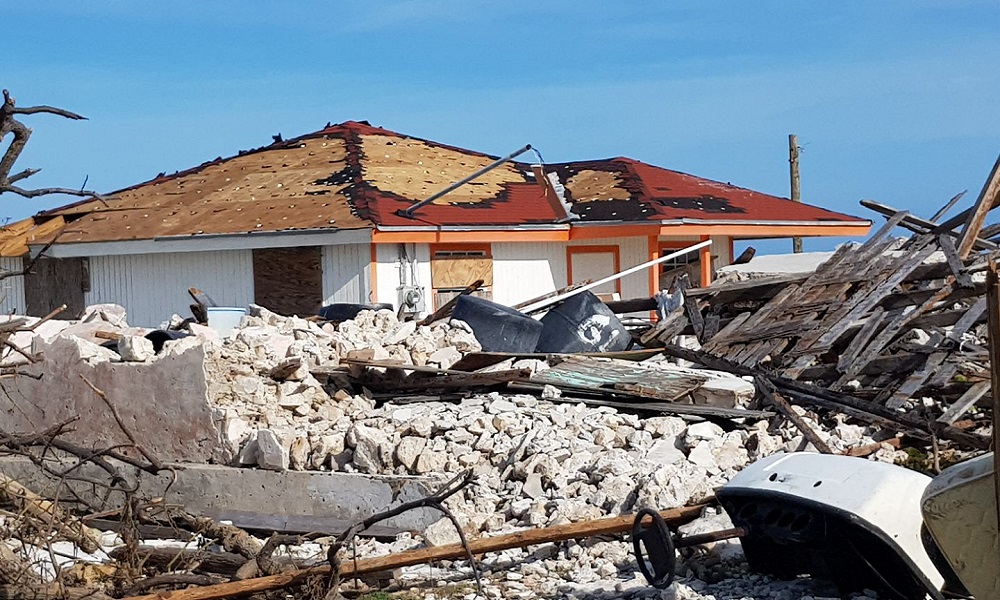 #Bahamas, September 12, 2017 – Ragged Island – Prime Minister, Dr. the Hon. Hubert A. Minnis Monday urged the remaining residents of Ragged Island who decided to “ride-out” Hurricane Irma in their homes to take advantage of a second opportunity to be evacuated to safety in the wake of the massive destruction inflicted by the storm.

The Government of The Bahamas on Monday committed to sending a flight into the ravaged island early Tuesday morning (September 12, 2017) to evacuate the 17 residents who did not take advantage of the initial opportunity to be evacuated from the island ahead of the dangerous storm.

Prime Minister Minnis later conceded to requests from a number of residents for more time to secure some of their personal property.   The flight into Ragged Island has now been rescheduled for Wednesday morning (September 13, 2017).

The Category 4/5 Storm caused massive damage and destruction to the island on Friday, September 8, 2017 with early estimates suggesting that almost 90 per cent of the buildings there were either completely destroyed or were severely damaged.

Downed power lines and poles snapped in half by Hurricane force winds still littered the community Monday as the Prime Minister and his delegation – which included Damage Assessment teams – toured the island to assess and evaluate the damage brought on by Hurricane Irma.

Government buildings (school, police station, clinic, post office etcetera), homes and businesses were either flattened by the storm or severely damaged. Many of those that were left standing were only a shell, having had doors and concrete walls torn out; roofs torn off, and windows blown out.

Communications are also out due to the extensive damage caused to the island’s infrastructure.

Navigating the community on foot and in the few vehicles that survived Irma’s wrath, proved a bit tricky as assessment teams and members of the delegation had to manoeuvre around large electricity poles and wires that blocked pathways.   The stench from the rotting carcasses of dead animals was also evident.   Prime Minister Minnis told residents that he was ordering the second evacuation in their best interests.

A Medical Doctor by profession, Prime Minister Minnis said the stench from the rotting carcasses of dead animals, presence of downed power lines and poles resulting in the absence of electricity, the absence of running and potable water, the loss of communications, the destruction of the clinic nullifying the availability of any potential medical treatment in the event of injury and/or sickness, and the presence of large amount of debris, could present health hazards for residents.

“What we see here today is complete devastation here in Ragged Island. All roofs are destroyed; health facilities are destroyed. Today we have no water, we have no light, no medical facility and as you walk about you can smell the stench from the carcasses of dead animals,” Prime Minister Minnis told.

“There are a lot of exposed nails around, if anything should happen to you there is no medical facility here – none.    (And) It’s only going to get worse over the next few days.   It’s only a matter of time before mosquitoes start.   I think it would be best for you to be evacuated to New Providence.   I know some of you want to stay but I think the health conditions are going to deteriorate, the stench is going to become worse, and you are placing your lives in jeopardy.

“I have already spoken to the relevant agencies and we can have a flight fly in tomorrow, leave Nassau by 8:30am and arrive here at least by 9:30am to evacuate you.”

Prime Minister Minnis said officials have taken residents’ concerns about leaving their properties unattended into consideration and have moved to address those concerns.

“I know that you are concerned about leaving your properties here, but we will have the Defence Force send the relevant vessel here to provide security and to try to clean up as soon as possible.”

Prime Minister Minnis said clean-up in the storm’s aftermath will take some time.

“What we see here — it’s not going to clean up overnight.   It’s going to take a while.   You are Bahamians and it is our duty and responsibility to ensure that you are safe and that the quality of your lives is maintained, if not improved.   But by staying here it will deteriorate,” Prime Minister Minnis added.

Scenes of the devastation on Ragged Island caused by Hurricane Irma during the passage of the storm through the Southeastern Bahamas and the Turks and Caicos Islands on Friday, September 8, 2017.