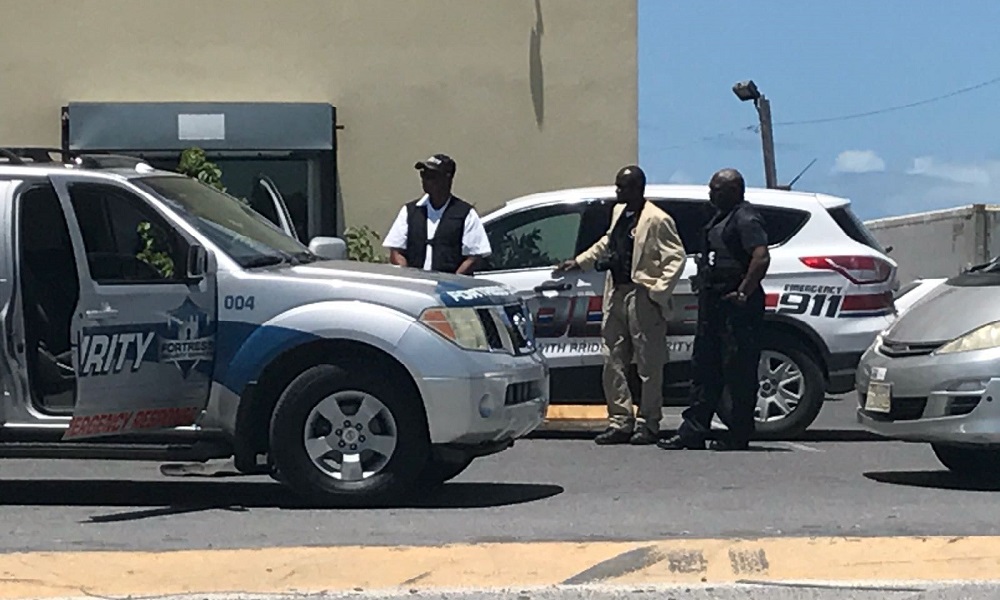 #TurksandCaicos, August 22, 2017 – Providenciales – Police say there was no crime committed by the security company residents had seen being searched on Monday early afternoon outside of Quality Supermarket.   It was thought it was a daytime heist somehow involving the security firm.

In a statement issued by Police today, it was explained:  “The Royal Turks and Caicos Islands Police wishes to clarify a rumor that is circulating on Social Media and Whatsapp that a ‘Robbery’ had taken place yesterday (Monday 21st August 2017) at the Quality Supermarket on Industrial Road.”

It was further shared by Police that, “Around 10:40am that day, acting on information, the Tactical Unit officers conducted a stop and search on a three men at the mentioned location for illegal firearms.   The three men were further detained and taken to the Police Headquarters for questioning and later released.”

A statement issued by former police and security company owner, #EvanSpencer of Spence Security & Investigation Services expressed outrage at the bold move by Police, who had to admit to being wrong.    Spencer was concerned that the public search of security guards, one man reportedly made to get onto the ground, shows the lack of connection there is between Police and security firms in the country.

A veteran in the field, Mr. Spencer said he met with the men who work for his son’s firm, Fortress Security Services upon his return to TCI on Monday.

“This is shameful on their part to carry out a major public  sting operation on a security company and faultless arrested all the security personnel handcuffed in public for NOTHING; no wrong doing at all.    These young man meet with me yesterday, the look of despair of disbelief plus the discouragement I saw on their faces was very disappointing, because they all express the same concerns; we are truly afraid of the police department and the trust factor is totally damaged now.”

Despite questions from Magnetic Media to explain the handling of this matter, Police said there was no further comment but did reiterate in that media statement, “Therefore to clarify, it was not a Robbery.”