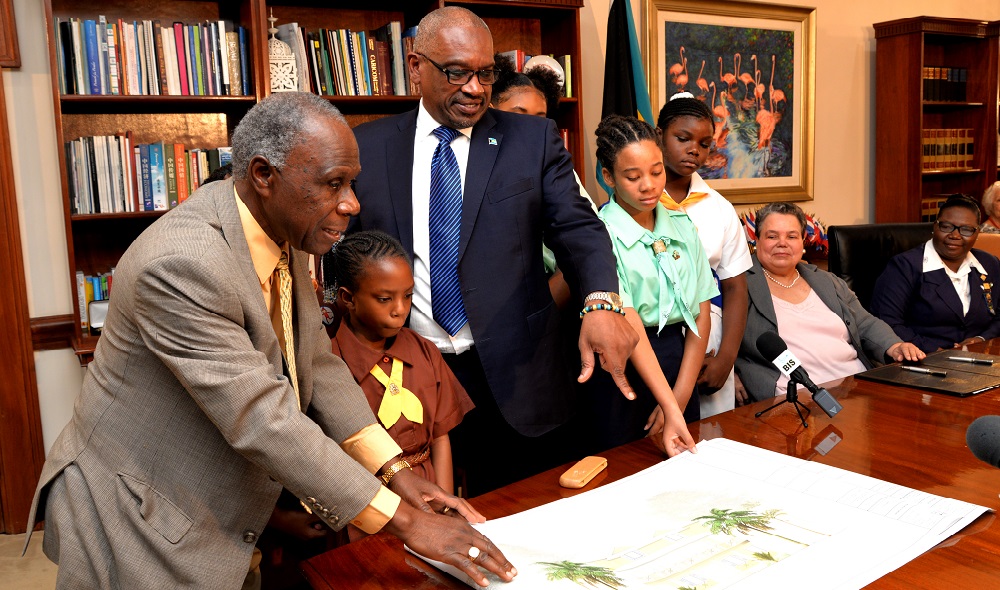 #Bahamas, August 28, 2017 – Nassau – The Lease Agreement signed Wednesday (August 23, 2017) between the Government of The Bahamas and the Bahamas Girl Guides Association (BGGA) has given members of the Association “new life” as it will assist the Association in fulfilling its longtime goal of constructing a new headquarters with additional facilities.

The new building, which will be constructed at the current site at Fort Charlotte, will cover 7500 square feet and will be two and one-half storeys high.   The Ground and First Floors will consist of Administrative Offices, a Conference Room and a Work Area for Guides.   The Upper Floor will consist of Sleeping Quarters for the Guides, particularly visiting Guides, thereby cutting down on costs associated with having to find accommodations for visiting Guides.

Construction costs will amount to $1.5Million.   The Association has already raised almost $800,000. Construction is scheduled to begin within two to three months.

Dr. Gail Saunders, Chairperson of the Building Committee of the Bahamas Girl Guide Association said the new Lease Agreement has given the Association and its membership “new life.”

“It’s been over twenty years that we have been participating in this particular project,” Dr. Saunders said.   “I think it (signing of the new Lease Agreement) has given us new life because sometimes you get to the point where you wonder whether you are going to make it or not, but now we have hope.

“I would like to thank you, Mr. Prime Minister, and the Government of the Commonwealth of The Bahamas for so generously granting us this extra land and also offering to help us to bring this long task to a happy conclusion.   We have not been sleeping at the wheel as we have raised almost $800,000 towards our construction costs.”

Senior officials of the Government of The Bahamas and executives of the Bahamas Girl Guides Association (BGGA) reached what was termed a “mutually agreeable conclusion” on the lease of property located at their Fort Charlotte Headquarters, Wednesday, ending a twenty-year ordeal for Guiding in The Bahamas.

Prime Minister, Dr. the Hon. Hubert A. Minnis, who led the Government delegation at the Lease Signing, also informed Guiding Officials that the Government of The Bahamas will grant all concessions provided by law and public policy to the Association to assist with the construction, and equipping, of the expanded facility.

Prime Minister Minis also promised to review – at an appropriate time – the level of subventions provided to the Association.  The Lease Agreement was signed by Mrs. Eugenia Cartwright (representing the Government of The Bahamas) and Mrs. Sonia Adderley (representing the Bahamas Girl Guides Association).

“This was a longstanding request that took over twenty years to fulfill,” Prime Minister Minnis said.   “It took successive governments over two decades to bring this matter to a mutually agreeable conclusion.”

Prime Minister Minnis said the Association was offered land on Dolphin Drive in the past, but that it was deemed unsuitable by the Association as there was no access road to the property and that such as move would have separated the Headquarters facilities from its Operations.

The Prime Minister said the expansion of the national headquarters, will be one of the most exciting and significant developments in the history of Guiding in The Bahamas.

“The signing of this Lease Agreement will remove the frustration and uncertainty which you have experienced over the many years.   You will be able to confidently move ahead with your plans,” Prime Minister Minnis told Guiding officials Wednesday.

Dr. Saunders said construction of a new Headquarters will allow Guiding Officials to meet a number of their objectives.

“We have all sorts of things planned (and) the present plot of land is not large enough,” Dr. Saunders said.   “We will be able to actually have nights there where they have their campfires without worrying about security and an old building (once the construction is completed).

“It’s really for us to state our gratitude for the extra land and the other help that will be forthcoming and hopefully in about a year or two, we will have our new headquarters and the girls and young women of the Bahamas Girl Guides Association can enjoy it,” Dr. Saunders added.

Architect, Mr. Alvan Rolle (left) discusses plans for the construction of the new Bahamas Girl Guides Association Headquarters with Prime Minister Dr. the Hon. Hubert A. Minnis following Wednesday’s Signing of the new Lease Agreement as Brownies, Girl Guides, and Rangers look on.    The new facility will be built on land located at the current Fort Charlotte site.