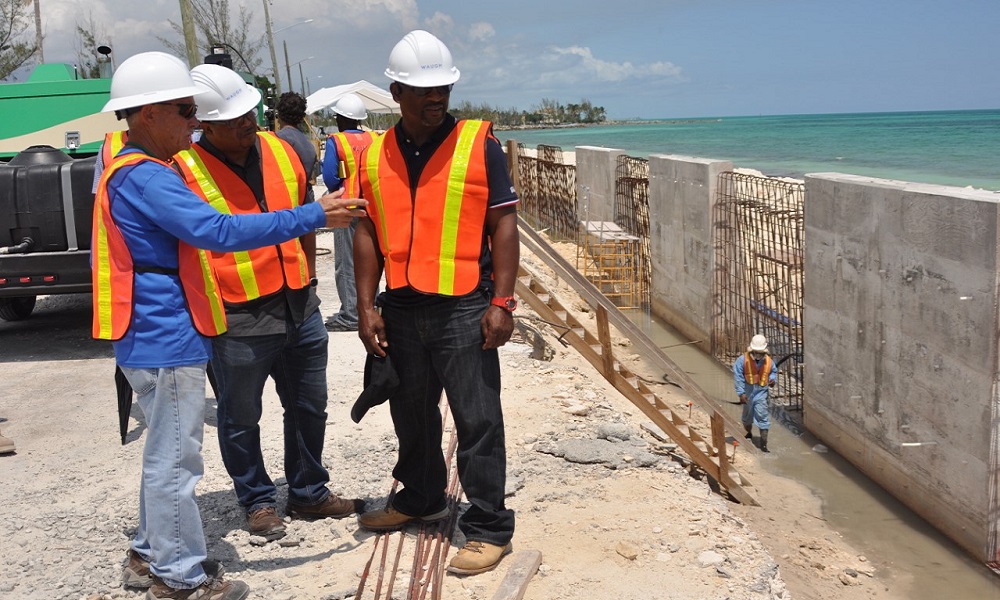 #Bahamas, August 20, 2017 – Grand Bahama – With a low pressure area categorized tracking towards The Bahamas and soon expected to become a Tropical Storm, Deputy Prime Minister and Minister of Finance, Hon. Peter Turnquest, along with Parliamentary Secretary in the Ministry of Public Works, Hon. Iram Lewis, on Friday wanted to get an update on work being carried out on the seawall at Smith’s Point.

The Deputy Prime Minister and the Parliamentary Secretary, August 18, 2017, invited members of the press along to meet with the Contractor for the latest news concerning the much-anticipated project in the Smith’s Point Community.

“As you know we’re in the middle of hurricane season and so this project is of paramount concern for us at this stage,” said Deputy Prime Minister Turnquest. “Residents of this community are aware of a potential storm traveling at this moment. So, it is all the more important that we make the kind of progress as quickly as possible to secure this site to protect the people in this community.

“I’m pleased to say that we’re now making positive progress in respect to this project.” 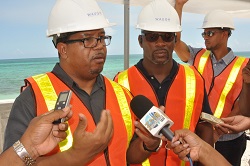 The project, which will cost the Government some $4.2 million, and was expected to be completed within 28 weeks, had some delays and a change of Contractors on the site, with Waugh Construction taking over the project.

“It is unfortunate that we have had the delays that we’ve had as a result of issues that have already been outlined,” added Minister Turnquest. “But again, we are making positive steps to get this project completed as quickly as possible.”

Minister Turnquest pointed out that the Government has a vision for the project that goes beyond just the construction of a seawall. He explained that the vision includes making a part of the project a promenade, which will help to increase economic activity to the community.

“So we are expecting and envisioning a real transformation of this waterfront so that it becomes not only a means of providing a safety factor, but also gives an opportunity to spur economic activity in this area,” said Minister Turnquest.

Parliamentary Secretary in the Ministry of Public Works, Iram Lewis said that while the Government would like to see the seawall project completed expeditiously, the focus is also on quality work.

“The whole idea of this project is to protect this settlement and the people of this community,” added Mr. Lewis. “We are working as best as we can to ensure that this project is completed not only at a fast pace, but with top quality, where we won’t have any concerns about washout in the future.

“We are ensured that we have selected the right team to complete this job and we are confident that once this project is completed that the residents of Smith’s Point will be pleased with the final result.” 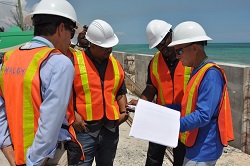 Asked if the project will still be on budget, Mr. Lewis said that staying on budget is always the objective and added that the Representative for the area also happens to be the Minister of Finance and so he is sure that the project will remain on budget.

“But we are dealing with nature and with a project like this there are always unforeseen occurrences that come up, but the goal is to stay within budget,” added Mr. Lewis.

Mr. Turnquest said that there have been some community meetings about the project within the Smith’s Point community to apprise residents of the on-going project.

The Deputy Prime Minister said that he is happy to see that the Contractor has agreed to partner with the community of Smith’s Point, by offering employment among the locals. Contractor Godfrey Waugh, President of Waugh Construction, confirmed that they are seeking to employ ten additional people to work on the completion of the project and their first preference include residents of Smith’s Point.

“We believe that at the end of the day, this project will be brought to a successful conclusion, which will be satisfactory to all involved.”

Header Photo – President of Waugh Construction, Godfrey Waugh (left) explains some of the work being carried out by his company on the Seawall at Smith’s Point. The DPM and the Parliamentary Secretary took a tour of the site on Friday, August 18, 2017 to get an update on the project.

2nd Insert – Deputy Prime Minister and Minister of Finance, Hon. Peter Turnquest, (center), along with Parliamentary Secretary in the Ministry of Public Works, Hon. Iram Lewis (second from right) look at plans of the seawall at Smith’s Point outlined by Godfrey Waugh, President of Waugh Construction.