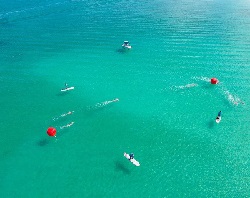 Turks and Caicos, July 7, 2017 – Providenciales – Swimmers in the 8th annual Turks & Caicos “Race for the Conch” Eco-SeaSwim on Saturday July 1, 2017 could not have asked for better conditions for the 2.4 mile (Ironman distance), 1 mile, and 1/2 mile events, as well as a 100 meter Children’s Swim.   The calm, clear, turquoise water impressed veterans and first time racers alike and confirmed why the event has been called one of the world’s best open water races.   Even Jojo added magic to the day with an appearance along the race course that stretched in front of Club Med, Rickie’s Flamingo Cafe (race start and finish), Ocean Club East, Tuscany, and Venetian to the Coral House.

The top finishers faced tough competition to claim conch trophies made by local artists Standford Handfield and Lucy Stubbs.   In the 1 mile Men’s Division Ryker Rush from the US edged out top TCI swimmer Dan Redmond, while Alexandra Atkinson took first in the Women’s Division.

In the 1/2 mile race, Amanda Abbot from the US, who came in 2nd last year, returned to take first this time.   TCI swimmer and swim coach Jessica Söderqvist, who had not swum competitively in three years, came in second.   In the 1/2 mile Men’s Division, TCI swimmer Jack Parlee won by a commanding lead. Jack, represented TCI at the CARIFTA Swim in Nassau this past April.

Diego Lopez from the US won the Men’s Division convincingly in the 2.4 miler, while the Women’s Division saw a thrilling finish between Beth Margalis and Megan Kruth from the US.   Both swimmers swam side by side the whole way—Beth coming out of the water just ahead of Megan.

In 2014, Megan, an Ironman triathlete and 17 time All-American Collegiate swimmer from Pittsburgh, Pennsylvania crashed her bike during training. She cracked her skull and suffered traumatic brain injury.   It was so severe that she could not swallow, talk, or walk.   When she came out of her coma, she began a long process of recovery.   Just last year she got back in the pool and started swimming again. On a friend’s suggestion, she decided to make the “Race for the Conch” her first athletic comeback event and brought with her family and friends to cheer her on. 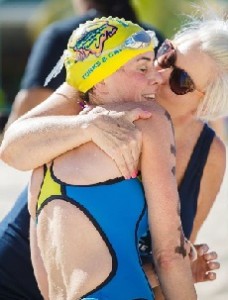 Said Co-Race Director Ben Stubenberg, “Megan’s remarkable 2nd place finish in the 2.4 mile, as well as 3rd place finish in the 1 mile race just a half hour later, won the hearts of everyone on the beach that day.   Truly life affirming story of courage. A great honor to have her here.”   Added CoDirector Chloe Zimmermann, “So inspiring! This is what the race is all about.”

Next year’s “Race for the Conch” Eco-SeaSwim will be held on July 7, 2018. Race website: www.ecoseaswim.com