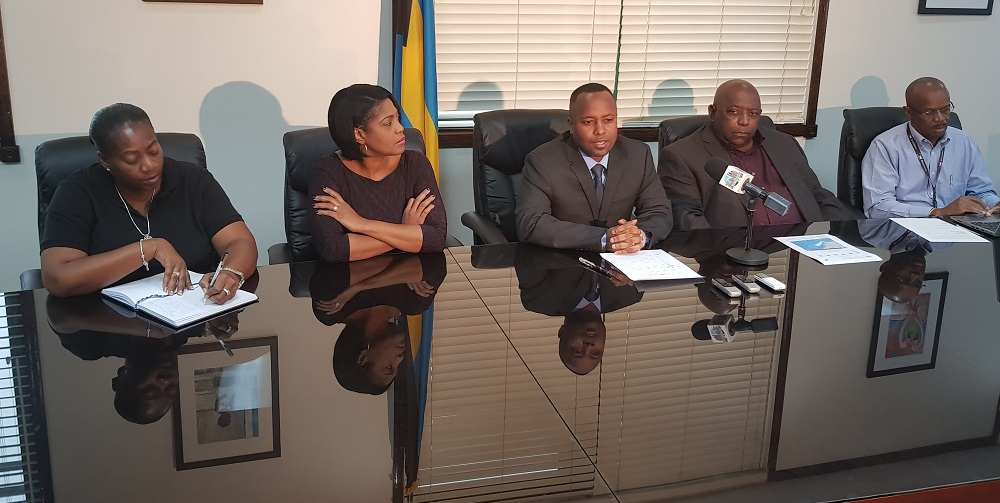 Bahamas, July 31, 2017 – Grand Bahama – The development of Tropical Storm Emily is expected to bring lots of rain to Grand Bahama, but the island should not expect to get a direct hit, said Minister of State for Grand Bahama, Senator the Hon. Kwasi Thompson, during a press briefing on Monday.

The disturbance off the coast of Florida, developed into a tropical storm on Monday morning, and the briefing was held to assure residents that not only is the Office of the Prime Minister in Grand Bahama monitoring the situation, but so are the Met Office in Grand Bahama and NEMA.

“We also want to encourage residents to also to continue to monitor the storm, we want them to stay in touch with local media, we also want them to take all necessary precautions to ensure that they are safe, their houses and businesses are safe as well.”

Minister Thompson noted that there are people whose homes are still in disrepair as a result of Hurricane Matthew in October last year, and added, “as we go through the continued process of repairing those persons’ houses, we want them to be assured that should the need arise, we’ve already put officials on alert that there is at least a shelter which will be made available for those persons who may not be able to stay at their houses.”

Residents are asked to listen to their local radio station which will inform them if the shelter is opened.

Kirk James from the Met Office  said that as of the location of Tropical Storm Emily issued at noon, it was located about 35 miles WSW of Tampa, Florida moving E at 9 mph. Maximum sustained winds were near 45 mph with higher gusts. Little change in strength was expected before landfall the afternoon.

Emily, he said, was expected to be downgraded to a depression tonight and traverse Central Florida, end up on the East Florida Coast and head out into the Atlantic on Tuesday. The storm was just under 300 miles NW of Grand Bahama early Monday morning, and the latest position brought the storm to about 268 miles away.

“There is no real concern for us, other than what the Minister already mentioned with rainfall potential. ” He continued, “We are simply concerned for the public to be aware of the heavy rainfall and we do have a hazardous or adverse warning for the public alert.” 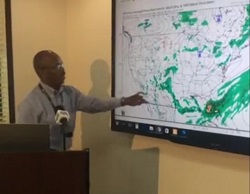 He explained that the warnings are issued from New Providence and there are special warnings in the forecast, but in the special warnings of the forecast, residents will see adverse weather threats will include: strong to severe thunder storms, locally heavy rainfall, and flooding. The National Hurricane Centre predicts 3/4 inch of rain in Grand Bahama, a low-lying flat island that has the potential to flood.

Tammi Mitchell of NEMA said, “With reference to Tropical Storm Emily, as everybody has been stating, we want to remind the public to be very vigilant in your hurricane preparations. Although we’re expecting a lot of rain, we want to remind you that by now, you should have already completed all of your preparations for the 2017 Atlantic Hurricane Season.

“We are also mindful of the fact that there are a number of homes, particularly throughout the island of Grand Bahama, that are still undergoing repairs. While we do sympathize with you, we want to make sure that you try your best to protect what it is that you have at this time. Meaning, try to find ways to secure your home a little better, and if you have to leave your home, try to seek shelter with a family member or friend where you are out of harm’s way, and you can possibly return after the storm has passed.”

Ms. Mitchell added that they will also be monitoring a number of vulnerable areas, namely the Fishing Hole Road, for flooding. The Public Hospitals Authority will also be notified to see that their medical team is going to be stationed in the west, and will mobilize them to the western side of the island if necessary.

Parliamentary Secretary of Information and Communication in the Office of the Prime Minister and MP for West Grand Bahama and Bimini, Mrs. Pakesia Parker-Edgecombe made a special appeal to those in West Grand Bahama. Those residents were severely impacted by Hurricane Matthew and “as we approach the month of October, we realize that there are many homes that still remain in disrepair. With that being said, we want to recommit our efforts to ensuring that each and every home owner is back in their homes. There is a process that we are currently undergoing, and we want to remind all of our residents that we hear your concerns, we know what those realities are and we are working feverishly to ensure that you remain and get back into your homes.

“We are calling on neighbours and family members of those who may be experiencing any difficulties with their home, who is really threatened by the severe weather. If you are aware of anyone who is next to you, who may need assistance, to please reach out as a neighbour, and ensure that they receive that assistance.”

PRESS BRIEFING – With severe weather affecting Grand Bahama imminent, Minister of State for Grand Bahama, Senator the Hon. Kwasi Thompson, hosted a press briefing to inform residents of what systems are and will be in place to ensure their safety. Shown from left are: Tammi Mitchell, NEMA; Pakesia Parker Edgecombe, Parliamentary Secretary of Information and Communication in the Office of the Prime Minister and MP for West Grand Bahama and Bimini; Minister Thompson; Harcourt Brown, Senior Under Secretary, Office of the Prime Minister for Grand Bahama; and Kirk James, Met Office. (BIS Photo/Simon Lewis)