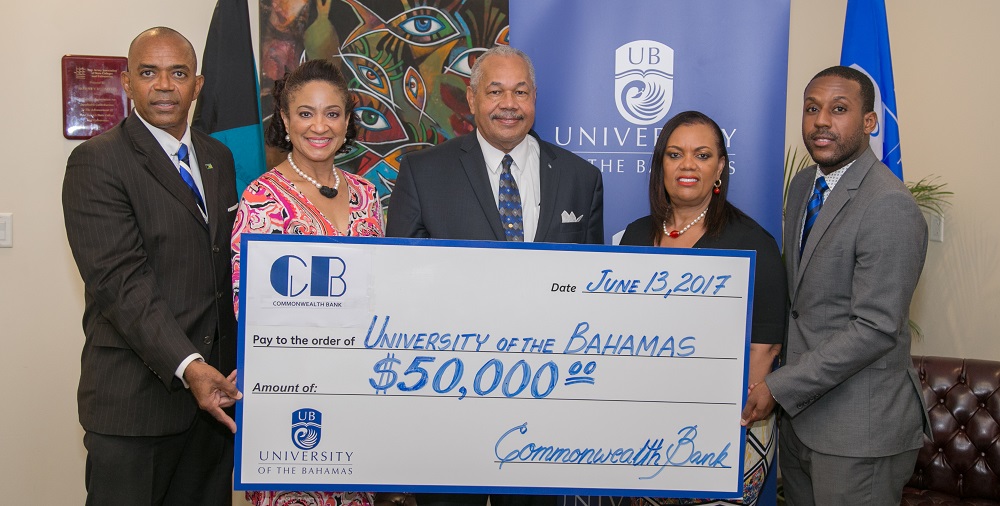 Bahamas, July 13, 2017 – Nassau – Calling the need for well-educated, agile leaders with strong communications skills essential in an increasingly global world, Commonwealth Bank boosted its support of its Emerging Leaders Scholarship Program at the University of The Bahamas this week with a donation of $50,000.

It was the seventh consecutive year the $1.6 billion bank lent its support to the program it created, this time bringing the total to $350,000. The funds endow scholarships for students who show leadership potential and choose to study economics, finance or other disciplines that prepare them for business, social or political decision-making positions.

“This is the seventh time we have donated to the Emerging Leaders program and just as the institution has evolved from college to university, we have watched, with satisfaction, the respect for leadership training gain significance in higher education,” said Denise Turnquest, Sr. VP Credit Risk of the publicly-held bank with 6,000-plus shareholders.

The university expressed gratitude for the contribution.

“We are extremely grateful for Commonwealth Bank’s commitment to higher education and this endowed scholarship programme,” said Davinia Blair, VP Institutional Advancement and Alumni Affairs. “When the bank partners with us in this way, it reaps tangible benefits for the scholars and the country. We cannot build the University of The Bahamas in isolation. We are developing an expanse of skills and talents that will fuel our economy and supporters of higher learning are vital in that regard.”

“Commonwealth Bank was built on belief in Bahamians and our support of the Emerging Leaders scholarship program is an example of helping to nurture the country’s future by preparing young people for the roles that will be necessary for The Bahamas to be all it can be in years to come.”

“It is in the challenging times, whether it is dealing with economic challenges, health issues, climate change or consequences of social change, that true leadership is tested. We do not want to be found wanting, we want to ensure that there is a generation of leaders who are agile, and well-educated, who approach decision-making with careful balance and analysis and can communicate their decisions effectively. That is a tall order and we are very pleased to be working with the University of The Bahamas to make it a reality.”

Support for the university level program is part of Commonwealth Bank’s commitment to education as its top priority. For the past decade, it has partnered with the Ministry of Education in numerous initiatives, including back-to-school events, parenting workshops and supplying school supplies and backpacks for tens of thousands of students throughout the islands, though it has branches on only four – New Providence, Grand Bahama, Abaco and now Spanish Wells, Eleuthera. The Bank also supports vocational training and televised and live streaming educational programming.

“The community continues to support Commonwealth Bank and we, in turn, have an unwavering commitment to support the community,” said, Mrs. Turnquest.

In 2016, its donations reached the highest amount ever – more than $830,000, with emergency assistance following Hurricane Matthew accounting for nearly $400,000. The bank also supports youth development and makes annual contributions toward its $500,000 million pledge to the Cancer Society of The Bahamas Cancer Caring Centre.

Since going public in 2000, Commonwealth Bank has consistently paid quarterly dividends and in most years has paid an extraordinary dividend prior to the holiday season. In 2016, it reported net earnings of $57.4 million. Its staff complement stands at more than 550 persons.