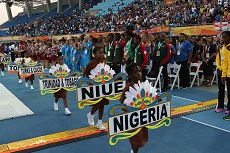 Bahamas, July 20, 2017 – Nassau – The Bahamas Commonwealth Youth Games held Official Opening ceremonies on July 18, 2017 at the Thomas A. Robinson National Stadium, during which the athletes representing their respective countries participated in an “Athletes’ Parade.”

There was buzz of excitement as the athletes waited to parade in this historic Games, the first event of a series that will take place in the Americas.

Behind the scenes all of the athletes filled the old sports centre area, waiting to parade in the stadium in their national colors with flags and other paraphernalia.  With all the countries filling the sports centre one would think that the world was so large, yet we are all connected.  Many of the athletes at the Commonwealth Youth Games already knew other athletes from different countries by competing in different events around the world or by meeting one another at boarding schools and colleges. 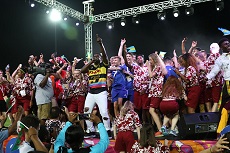 Many more connections were made as they waited to march, as the young athletes went around trading country pins and showing respect and well wishes to their opponents. The vibe was a great balance of strong national pride and Commonwealth country fellowship.