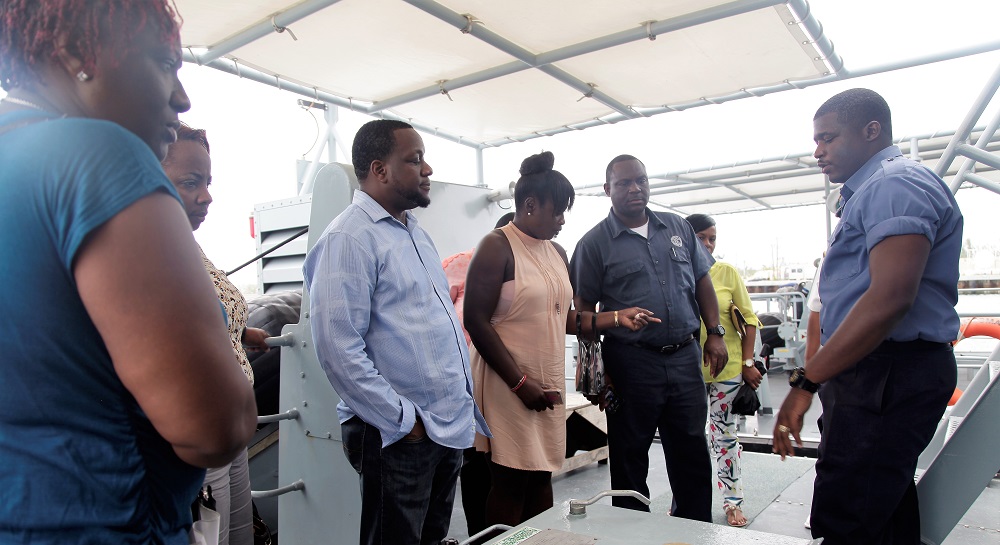 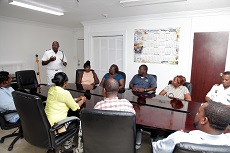 Bahamas, July 22, 2017 – Nassau – Some members of the graduating class of 1991 of the A.F Adderley Senior High School paid a visit to Her Majesty’s Bahamian Ship (HMBS) Coral Harbour on Thursday Morning.

Assistant Training Officer Senior Lieutenant Origin Deleveaux along with 9 of his former classmates, were greeted by Captain Coral Harbour Captain Clyde Sawyer. After formally welcoming them onboard the ship, the class was then escorted to the Headquarters Department, where they were introduced to Commander Defence Force, Commodore Tellis Bethel. There, he shared with them a brief history and future initiatives of the Royal Bahamas Defence Force.

The tour concluded with the visitors being given a brief a tour of one of its sea-going fleet and a luncheon hosted by Senior Lieutenant Deleveaux.

The Royal Bahamas Defence Force remains committed to guarding our heritage by protecting the territorial borders of The Bahamas.

RBDF Visit Photo two shows: Commander Defence Force, Commodore Tellis Bethel and the A.F Adderley Senior High School class of 1991 at the Defence Force Base on July 20, 2017. The former graduates, who were special visitors at the Base, were given a brief tour and hosted to a luncheon.

RBDF Visit Photo three shows: Some members of the former A.F Adderley Senior High School class of 1991 being given a tour onboard one of the Defence Force’s fleet by Marine Seaman Christopher Moss. The visiting guests were also hosted to a luncheon at the Base.