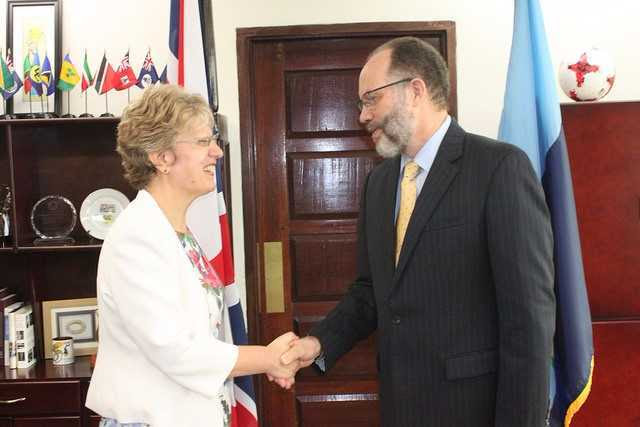 Guyana, June 28, 2017 – Georgetown – Even as the United Kingdom continues to face its fair share of challenging events, it today committed to closer relations with the Caribbean Community (CARICOM).

New High Commissioner of the UK to the Eastern Caribbean and CARICOM, Her Excellency Janet Douglas said on Thursday 22 June that her country wanted to infuse fresh vigour in its relations with the Region. She was at time presenting her Letter of Credence to CARICOM Secretary-General, Ambassador Irwin LaRocque, at the CARICOM Secretariat in Georgetown, Guyana.

In the wake of the recent acts of terrorism in the UK, Ambassador LaRocque placed on record the Community’s unreserved condemnation of orchestrated attacks perpetrated against innocent civilians.

He said: “CARICOM joins its voice to that of the international community in condemning terrorism in all its forms and manifestations. Such disruptive and vicious acts underscore the need for the international community to deepen cooperation in the battle against terrorism.”
Secretary-General LaRocque also extended sincere condolences to the UK for the loss of lives and homes due to the disastrous fire at Grenfell Tower in West London in the early hours of 14 June.

According to the new UK envoy, it was indeed “a sombre and challenging time” for Britain, but hope was inspired by the message of Her Majesty the Queen on her official birthday, when she said, “Put to the test, the United Kingdom has been resolute in the face of adversity.” That spirit of resolve she said is one that was shared with CARICOM to promote common values such as respect for human rights, the rule of law, and a determination to protect the fragile environment.

Ambassador LaRocque stated his appreciation for Britain’s strategic support of issues relating to climate change. Noting that the Caribbean had been designated as the most natural disaster-prone region in the world, he said most Member States bore a heavy debt burden from rebuilding after major climatic events which were more frequent and more intense.

Against this backdrop, he said CARICOM continued to advocate for development partners to revisit their policies on graduating vulnerable countries out of access to concessionary development financing. The use of per capita income as the primary criterion for access, the Secretary-General said, was inadequate, adding that vulnerability must be factored in. He further appealed to the UK to include vulnerability of CARICOM countries in reconsidering the eligibility criteria for access to the Infrastructure Fund it has allocated to countries of the Region.

The Secretary-General also raised the issues regarding blacking-listing of CARICOM countries as non-cooperative tax jurisdictions, de-risking and the withdrawal of correspondent banking relationships by some international banks.

He urged the UK – a key player in the OECD and the EU – to communicate the positions of global financial authorities which have affirmed the financial integrity of CARICOM countries.

Ms Douglas said that the United Kingdom will continue to collaborate with its CARICOM partners to combat threats to their collective security, such as narcotic trafficking and other international organised crime.
As her country negotiated its departure from the EU, she assured that it will retain close relationships with European partners. The new envoy pledged that along with other British High Commissioners in the Region, she will work to manage the implications of Brexit for CARICOM, particularly in the areas of trade and development.

Looking forward to the April 2018 Commonwealth Summit, Ms Douglas signalled the UK’s desire to work with CARICOM to ensure its success.

“The Summit will provide a platform on which to set a new vision of a strong and effective Commonwealth. It offers the opportunity to re-energise the Commonwealth, so that it better upholds its shared democratic values and delivers greater security and prosperity to its citizens,” Ms Douglas said.

After the accreditation, Ambassador LaRocque and Ms Douglas further discussed the challenges with NCDs, security, as well as preparations for the Commonwealth Summit and the UK-Caribbean Forum in 2018.