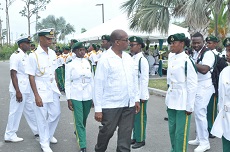 Bahamas, June 14, 2017 – Grand Bahama – Permanent Secretary in the Ministry of National Security, Carl Smith said the Royal Bahamas Defence Force Rangers program has for many years been successful in producing well-rounded and disciplined citizens of The Bahamas, and that it has become a model of excellence for youth organizations.

In his address, speaking on behalf the Minister of National Security, the Hon. Marvin Dames, at Saturday’s Royal Bahamas Defence Force Rangers Installation Ceremony at C.A. Smith Complex, Mr. Smith noted that youth development must be a priority for the growth and sustainability of a nation.

“The Royal Bahamas Defence Force has been involved in such development since 1995.  With the recent implementation of its strategic vision for youth development called ‘Operation Regeneration’,” said Mr. Smith,  “It is intended to transform the Rangers Program into the Rangers National Youth Service Program, with the hope of establishing the Rangers Leadership Academy.” 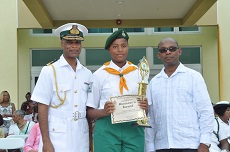 PS Smith noted as a brief history of the program, it was first introduced at the Donald Davis Secondary School with the initial goal of redirecting the path of challenged male students towards the path of becoming more productive within their schools and communities.

He pointed out that the Rangers Program has since grown to become a voluntary program that involves a cross-section of youths among five islands of The Bahamas. Its main goals are in the areas of youth development, youth leadership, technical skills, vocational skills and life skills, coupled with both military and maritime training.

“The Rangers Program has consistently been able to produce well-rounded cadets who have been imbued with positive attitude towards self, their peers as well as law and order,” added Mr. Smith.

“The Rangers Organization is extraordinary; its structure and value system is comparable to no other youth program in this country.   The program has included over a thousand participating students from twenty-two schools in New Providence and thirteen schools in the Family Islands.” 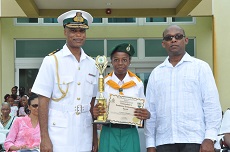 He told them they will find themselves in various professions, and “make up our communities, churches and eventually our military and law enforcement personnel.   I therefore encourage you to remain focused.   You have an enviable opportunity to make a difference in your schools, communities and your country.”

NEW CADETS – Close to fifty new Cadets joined the ranks of the Royal Bahamas Defence Force Rangers during Installation ceremonies on Saturday morning on the grounds of the C.A. Smith Building. The Rangers Program assists young people in a variety of areas including youth development, youth leadership, technical, vocational and life skills.

INSPECTING RECRUITS – Permanent Secretary in the Ministry of National Security, Carl Smith, along with Commander of the Royal Bahamas Defence Force, Commodore Tellis Bethel inspect the guards during Installation ceremonies on Saturday morning.

MINISTER’S AWARD – Tyrontel Bosfield was the recipient of the Minister’s Award during Installation ceremonies of the Royal Bahamas Defence Force Rangers.  At left is Commodore Tellis Bethel and at right is Permanent Secretary for the Ministry of National Security, Carl Smith.