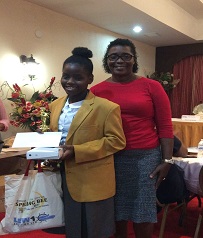 The participating schools and their representatives were: 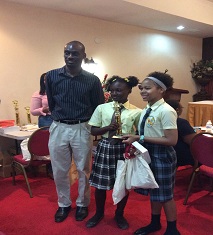 The excitement of being on Grand Turk for the Spelling Bee precipitated a photograph to capture the occasion for posterity.  The Bee was last held on Grand Turk in 2008.  The Minister of Education, Youth, Sports and Library Services, Hon. Josephine Connolly, was present to share this historic occasion with the participants and their coaches.

The participants came prepared to win. By the end of Round thirteen (13), seven (7) contestants remained causing the organizers to suspend the Bee for the day to conclude in a Finals scheduled for Friday, 2nd June, 2017 on Providenciales. T  he following students advanced to the finals:

The Finals commenced at 9:30 a.m. on Friday, 2nd June at the Conference Room of the Airport Inn.  The expectations were very high and the competition continued.  After four (4) grueling rounds, the judges were able to declare the winners of the 2017 Spelling Bee: 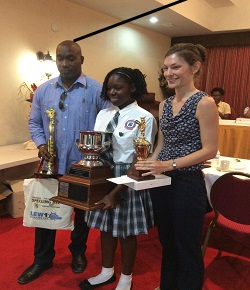 The Department of Education congratulates this year’s spelling bee participants and encourage our boys to participate next year.  We extend congratulations to Zobreann, the 2017 winner, for also amassing the most bonus points.

The Education Department hereby thanks Lew 1 Shipping for the continued collaboration and their strong commitment over the years to the Inter-High School Spelling Bee. Sincerest appreciation is also due to our other sponsors including Baci Ristorante; Caicos Dream Tours; FLOW, Graceway IGA, Island Vibes and Inter-Caribbean Airways.

FILE NOTE: Zobreann Brown was the Top Performing Student in the Grade Six Achievement Test in 2014.