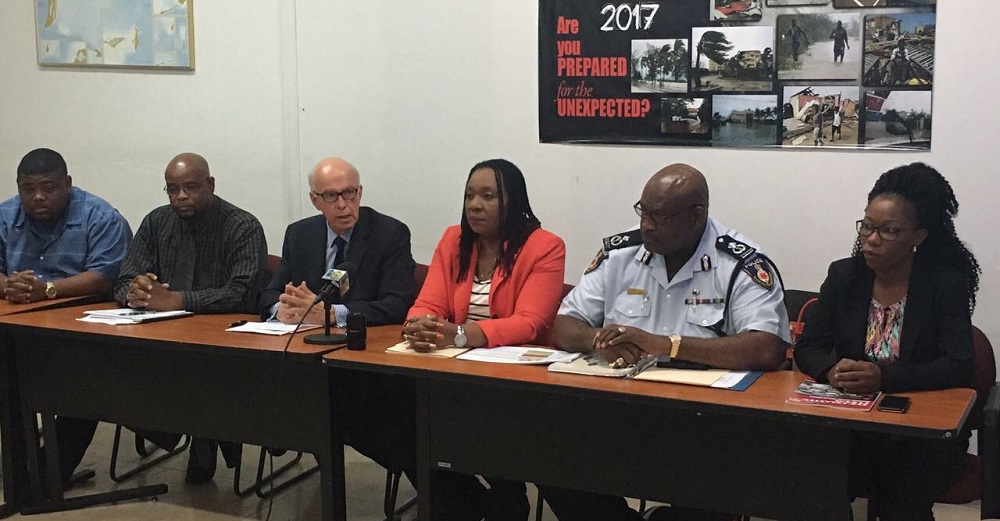 Turks and Caicos, June 23, 2017 – Providenciales – There was a report to the public yesterday from the National Disaster Management Committee which is co chaired by the Governor and the Premier.  In speaking to the media, Governor Dr. John Freeman urged all residents on the Turks and Caicos Islands to “be alert, be prepared.”

The call for a unified approach to being prepared and knowing the role each resident and agency has to play was cited as key, by the Governor.

Meanwhile DDME assured that theya re watching and warning about activity in the tropics.

Consequently, they are urging all residents, especially those who have not taken the hurricane season seriously, to have their family preparedness plans.  A new App and mobile messaging were cited as ways they are keeping the public informed, and fast.

“There is a tendency for us to assume that based on the predictions it’s an average season, therefore we do not need to prepare early, but this couldn’t be further from the truth, as the slogan or the saying goes, ‘It Only Takes One Storm’, and we have seen a slew of tropical storm events in the Turks and Caicos islands such as Joaquin and Cristobal, it wasn’t a hurricane and yet, we found persons that were not prepared and required assistance from emergency departments.”

There was caution from Assistant Commissioner of Police, Rodney Adams.   “One of the things I want to remind the public about is that, after the passage of the storm, please stay put until the all clear is given by DDME, because being on the streets trying to be inquisitive, trying to find out  what is happening only places yourselves and other emergency responders in risky situations.”

Though TCI dodged a big bullet when Hurricane Matthew veered off, but the evidence of the damage which could have been done is close enough, with both Haiti and The Bahamas suffering devastating blows by the strong storm last October.  While there remains room for refining and work that needs doing, Governor Freeman communicated that the Committee and its partners are determined to do as much as we can.”