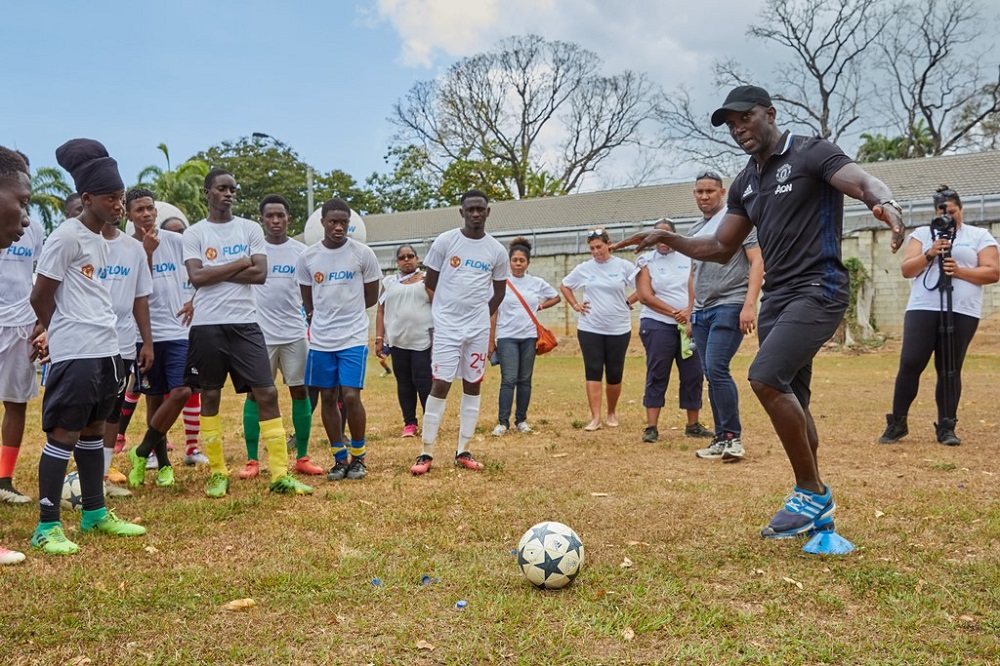 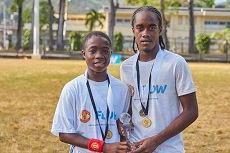 Trinidad, May 11, 2017 –  Port-of-Spain –  Thirteen-year-old Ronaldo Flowers of Antigua and 16-year-old Che Benny of Trinidad and Tobago will gain the ultimate football experience as they head to Old Trafford in Manchester, UK to see Manchester United play against Crystal Palace on May 21. The young footballers won the trip after reaching the final round of the Flow Ultimate Football Experience which was hosted by Flow and the Manchester United Football Club in Trinidad.

The event, which took place recently, was the culmination of a series of competitions across Flow’s 15 markets throughout the Caribbean. The finals at President’s Grounds, St Ann’s saw two young footballers from each country vying for the coveted prize. Among the 30 participants, 15 countries were represented – Anguilla, Antigua & Barbuda,  Barbados, British Virgin Islands, Cayman, Curacao, Dominica, Grenada, Jamaica, Montserrat, St. Kitts & Nevis, St Lucia, St. Vincent & Grenadines, Trinidad and Tobago and Turks & Caicos.  The players were also each accompanied by a parent or guardian and their coach.

They participated in a two-day skills session with one-on-one training with Manchester United Soccer School Coaches (MUSS), Head Coach Mike Neary and Billy Miller.   This is the second year of collaboration between Flow and MUSS.   Through the Flow Ultimate Football Experience, the two partners gave the young athletes a greater opportunity at success and brought the region closer to one of their favourite sports. 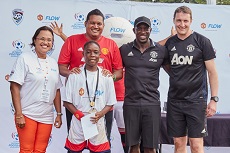 Ronaldo Flowers has been given the nickname ‘Flower Power’ on the field.   Originally from Jamaica but lives in Antigua, Flowers was named after the famous footballer. The youngster has been playing the game for the past four years and has in his vision to become a professional player. He plays central attack and midfield positions, which allow him to do what he likes best, score goals.

“It felt like a dream coming true,” Flowers said following the announcement. “The challenge was very difficult because there were other talented players but I played hard.”

Che Benny has been playing football since the age of five when his uncle took him to see St Ann’s Rangers – the team with which he still plays. Team coach Everett Williams, who was also present at the weekend challenge, says Benny was born with a natural talent. He was happy Benny received the exposure playing with other footballers in the Caribbean.

“I stepped up to the plate,” Benny said after winning the award.  He also hopes to meet his favourite footballer, the Red Devils’ midfielder Juan Mata when he visits Manchester.  Young Benny also said “football is my passion, I eat, sleep and dream about football and playing the sport professionally.”

Flowers and Benny, along with their coaches, will travel to the world-famous football stadium to see Manchester United’s final Premier League game of the season against Crystal Palace. This VIP experience will also include a visit to the Manchester United Museum and Tour, taking in the history of the club followed by a tour of the iconic stadium.

The two winners received their trophies from top officials present on the stage including Trinidad and Tobago Sports Ambassador and former Manchester United player, Dwight Yorke and Trinidad’s Minister of Sport, Hon. Daryll Williams.  Minister Williams thanked Flow in his remarks for providing this kind of opportunity for young footballers in the region.  Minister Williams reflected “I looked up to Dwight Yorke when I was a young footballer as being an inspiration for Caribbean players however there were no such opportunities like this one from Flow and Manchester United. Through this Flow Ultimate Football Experience you youngsters now have access to some of the best coaches and players in the world of football.”

“I am pleased for them both!” said a very proud Wendy McDonald, Flow’s Senior Director of Communications for the Caribbean, “This is a-once-in-a-lifetime opportunity and definitely the “ultimate football experience” that these two young footballers have been given through Flow’s partnership with Manchester United.  We will continue to follow their journey to Manchester and we hope this will encourage even more aspiring footballers from the Caribbean to be ready for opportunities like this.”