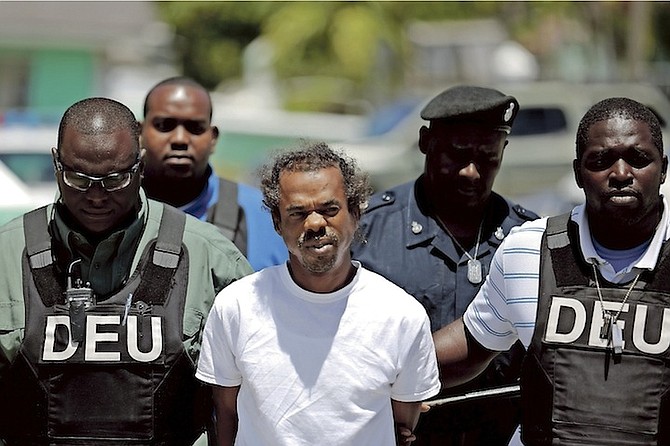 Bahamas, May 26, 2017 – Nassau – A grandfather of 10 was sentenced to five years in prison on Monday, May 22, after pleading guilty to several drug related charges in connection with a recent seizure of marijuana in South Andros worth over $1m.

Subsequent to entering a guilty plea to all four counts, the Armbrister Street, Fox Hill resident was sentenced to five years, three years, five years and three years imprisonment respectively for each count, all to run concurrently.

Another man, 59-year-old Bernard Clarence Young of Mar’s Bay, South Andros, pleaded not guilty to all four charges concerning his alleged involvement in the incident in question, and was subsequently remanded to the Bahamas Department of Correctional Services (BCDS). His matter was adjourned to June 6 for trial.

According to initial reports, two Bahamians were arrested on Thursday after police in South Andros seized drugs weighing 1,602 pounds, with an estimated street value of $1.6m.

The large quantity of marijuana was found in 44 nylon sacks, a suitcase containing a number of small packages and 19 individual packages of various sizes, police initially reported.

On Monday, Levarity’s attorney Alex Morley petitioned the judge to be lenient with his client, stating that Levarity had no previous convictions and has “many dependents,” in the form of ten children and ten grandchildren. Mr. Morley also said Levarity has been a fisherman for some 30 years.

In response, however, Magistrate Andrew Forbes said the Fox Hill resident’s actions ultimately had a “detrimental affect” on Bahamian society, especially when considering the “violent component” associated with drug trafficking.

Levarity was ultimately sentenced to five years in prison, with the sentence to start from May 22, according to the magistrate.