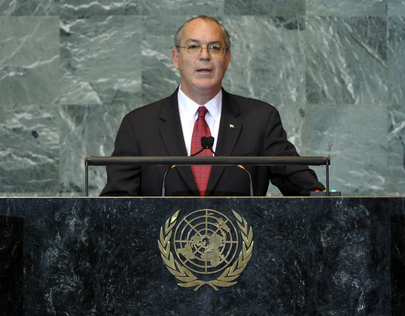 Bahamas, April 27, 2017 – Nassau – “Are we saying that a rich, white person shouldn’t run for parliament?” These were the sentiments expressed by Former Deputy Prime Minister and FNM candidate for St. Anne’s, Brent Symonette in a response to a preacher who voiced his disapproval on air, articles posted in the newspaper and other critics who questioned his wealth. He added, “if rich people aren’t suppose to be in politics, then that is a sad day for the Bahamas.” This comes as a result of his financial declarations, which earned him the top spot on the wealthiest list of candidates vying for office in this year’s general election.

Financial disclosures, which were officially submitted to the Parliamentary Registration Department this past week, showed that Symonette has a net worth of $156,235,000. This amount far exceeds that of the other nine candidates on the list of top 10 wealthiest candidates combined.

Symonette said, however, “I’m comfortable with my declaration” despite the backlash he’s been receiving. He added, “I’m a Bahamian so I have that right, and if you want to criticize me for it, fine.”

Many critics have been focusing on the suspicious huge jump in Symonette’s assets from one year to the next. However, he explained that the reason for this was because he inherited his mother’s wealth after she passed way. He also said, “They want to make a lot of issues” but explained that his earnings were due to the fact that, “I’ve been out of government for 5 years, gone back to the private sector.”

Symonette also fired back to critics stating that there were other candidates vying for a parliamentary position who were holders of U.S bank accounts and questioned whether or not they had declared or could explain those accounts.

Also suspicious is Tourism Minister, Hon. Obediah Wilchcombe declaring his net worth to be $1,512,751.14, yet has listed $0 in his savings account. He also listed no insurance, no accounts receivable, and no security, real estate or other income except a salary of $105,000. This has also left citizens questioning his bad saving habits as a government minister. North Andros and Berry Islands’ constituency candidate, Denise Rolle, however, listed the lowest net worth. Rolle listed a net worth of $1,500 with no salary noted.

Symonette’s net worth is 27 times that amount of Prime Minister Perry Christie. Christie, however, was also among the long list of millionaire candidates. According to financial disclosures, the Prime Minister has declared his net worth to be $2, 029,151 which isn’t a big change from his last declaration in 2012. Vying to remove Christie from his Centreville constituency is newbie Bishop James Darling of the Bahamas Constitution Party. Darling ranked #2 on the wealthiest list with a net worth of $48M, listing his occupation as “Minister of religion.” Though it is unclear where Darling’s net worth is derived from, he also listed no salary.