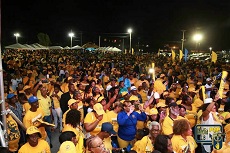 Bahamas, April 21, 2017 – Nassau & Grand Bahama – Friday night and if you weren’t at a rally somewhere across the Bahamas, you were probably tuned in via Television or Facebook.  All three parties sought to capitalise on the LIVE feature on Facebook in the lead up to the 2017 polls. With numbers on the PLP and DNA pages fluctuating from 180 to 260 views, while the FNM seems to have to highest online viewership of 900.

Shares via facebook ranked the highest for the FNM coming in at a whopping 27,000 views and 2,000 shares, while the PLP recorded just about 700 views and 14 shares. DNA live saw just over 1,100 viewed and 35 shares.  The comments sections is not being spared either, as supporters take full advantage posting their support for their party or are either defending ‘haters’ ‘trolling’ the page with negative comments.

Most rallies got on start around 8pm tonight and are expected to continue til midnight, as parties gear up their support into weekend walkabouts.