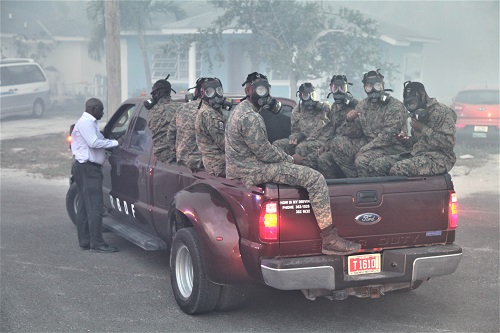 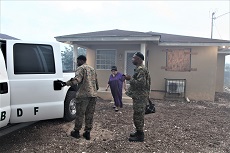 The team which was supervised by Chief Petty Officer Ramone Storr assisted with the evacuation of approximately half of the residents of Jubilee Gardens from homes; provided medical treatment for 31 Jubilee Gardens Residents for respiratory-related problems; transported 25 Jubilee Gardens residents to safety; provided firefighting assistance at the north-western perimeter of the fire near Gladstone Road and carried out joint patrols with Police of Jubilee Gardens throughout the night.

In the meantime, the Defence Force is continuing with its joint patrol efforts with Police in the inner city as part of its crime prevention efforts.  The Commander Defence Force (Acting), Captain Tellis Bethel commended the Officers and Marines for their rapid response in providing immediate assistance to residents threatened by the fire.

RBDF Photo one shows: RBDF Marines arriving in Jubilee Gardens to assist with fire-fighting on Sunday afternoon.   The marines were deployed to assist the neighborhood which was overcome with fire and smoke from the nearby landfill.

RBDF Photo two shows: Defence Force officer Lieutenant Commander Henry Daxon and Marine Seaman Enoch Smith assisting an elderly resident of Jubilee Gardens during the recent landfill fire on Sunday March 5th. The thick smoke in the neighborhood was a result of the nearby fire.