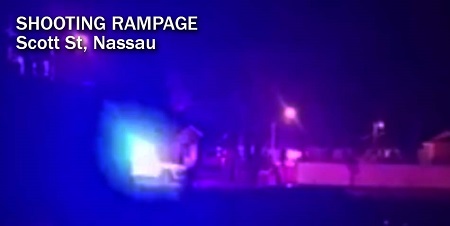 Nassau, Bahamas, February 24, 2017 – Police are appealing to the public for information to assist in their investigations into a shooting incident that has left a man dead and two other adult males along with a one year old female child detained in hospital on Thursday 23rd February 2017.

According to reports, shortly after 7:30pm, a group of persons were standing in front of a home located on Scott Street off Hospital Lane, when two males armed with handguns approached and fired several shots at them before fleeing on foot.  Three adult males along with the infant child were rushed to hospital where one of the males died and the other two males remain in stable condition.  The child’s condition is listed as stable.   Investigations are ongoing.

ANYONE WITH INFORMATION ABOUT ANYONE ENGAGING IN CRIMINAL ACTIVITY, NO MATTER HOW SMALL OR INSIGNIFICANT (THE TIP) MAY SEEM, IS URGED TO ANONYMOUSLY CONTACT THE POLICE AT 919 OR CRIME STOPPERS AT 328-TIPS (8477) (NEW PROVIDENCE) OR 1-242-300- 8476 (FAMILY ISLANDS)