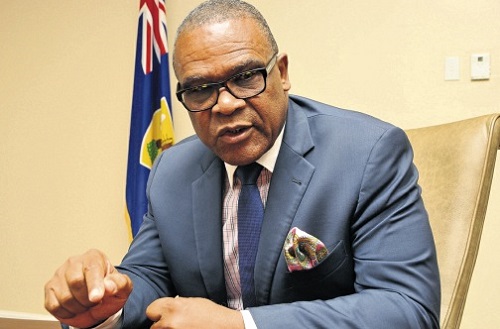 Providenciales, TCI, February  13, 2017 – At today’s sitting of the House of Assembly, the Leader of the People’s Loyal Opposition was erroneously suspended for the remainder of the day in a move instigated by the Premier and executed by the Speaker of the House.

This arose when Hon. Misick correctly called Member for Cheshire Hall and Richmond Hill a Pompous Blowhard for his numerous attempts at trying to take credit for the  actions initiated and budgeted for by the previous PNP administration, namely: the TOLCO agreement designed to saving Turks and Caicos Islanders Home; Phase 2 of Road Works in the Cheshire Hall Area; Funds identified to secure the perimeter fence of the prison; Funds identified to cover treatment abroad; in addition to other projects.

To add insult to injury the proper procedures were not followed and the Speaker could be heard referring to Standing Order 59(3) which states “Except in respect of a substantive motion for rescission, a member may not reflect on a vote of the House or attempt to reconsider a specific matter upon which the House has come to a conclusion during the current session”. He should have referred Standing Order 59(4).  In an effort to guide the Speaker in the correct procedures of the House in this matter Member for Leeward and Long Bay Hills was told by the Speaker “It’s the speaker’s turn now, have your seat and turn off your mic”.

Of grave concern was the visible side bar conversation between the Speaker, Premier, and Member for Cheshire Hall and Richmond Hill, when the speaker used the incorrect procedure clearly instructing help on the next moves during the 10 minute suspension of the House’s proceedings.  Also, of note was the Member for Cheshire Hall and Richmond Hill stating that the $300,000 as tourism additional funding for the fish fry location in the Bight was declared to the house, “it’s not a valentine’s gift but to ensure we win the bi-election”.  The change is here, no record, no plan, just taking credit for the work of the PNP administration and silencing anyone who attempts to set the record straight or oppose them.

We, Your Loyal Opposition will keep records of partiality as it relates to the Speaker’s execution of his duties, which must be firm, fair and consistent in dealing with all Members of the House of Assembly, regardless to which side of the House they sit on.
N.B. Definition of Blowhard:  a person who blusters and boasts in an unpleasant way.