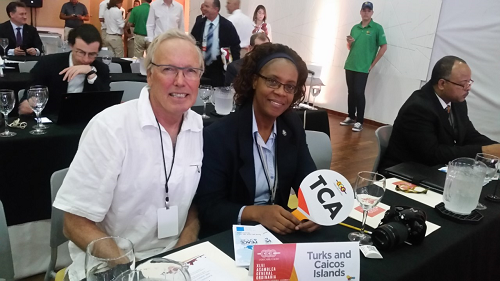 Providenciales, TCI, February 14, 2017 – The Turks and Caicos is another step closer to having Olympic status, though admittedly there are still many more steps to go… but this time our islands happily settle for a regional acknowledgement that gives TCI athletes the opportunity to compete under the Turks and Caicos flag.

The Ministry of Sports today made the announcement that TCI athletes are now eligible to compete in the games of the Central American and Caribbean Sports Organization (CACSO), one of the major regional sporting events associated with the Olympic movement.

The country’s sports Director, Judith Robison calls it a big victory for the islands and it enables our athletes to stay tied to their homeland while being a British overseas territory.   “This is a big victory for us because previously our athletes were not eligible to compete due to the fact that TCI does not have Olympic Nation status. However, the vote now makes it possible for us to compete at a very high regional level with other aspiring Olympians, and motivates us to continue pushing and knocking on doors until we acquire our goal as an Olympic body.”

This feat was not accomplished due to any one initiative, as a matter of fact because the country has so many active sporting bodies tied to international federations, the nod of approval was given. The report from the Ministry says that the Turks and Caicos qualified with Athletics, Football, Basketball, Sailing, Rugby, Swimming, Cycling, Softball, Tennis and Volleyball.

Now, the country prepares for the CACSO Games in August in Colombia.   The decision was made at the 49th General Assembly of CACSO, where delegates voted unanimously to make Turks & Caicos Islands an Associate Member.