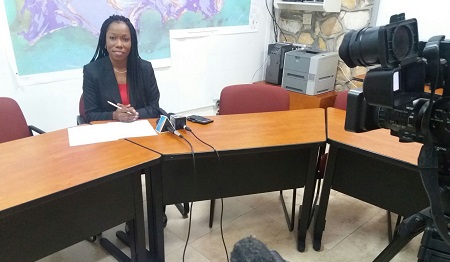 Providenciales, TCI, January 9, 2017 – It is Earthquake Awareness Week and today, the Director of the Disaster management and Emergencies, Dr. Virginia Clerveax gave media interviews to share what will happen and what we should know when it comes to earthquakes… for example what do we do when or if an earthquake strikes: D C H… Drop, Cover and Hold on.   “The easiest thing if you’re indoor, we’re asking persons to drop under a table or a hard surface, cover their head and their torso if possible to prevent further injury, and hold on to whatever they can hold onto cause’ the building will be shaking.”

Coincidentally, on Sunday, Trinidad and Tobago recorded a 4.3 magnitude earthquake and last Wednesday, the Dominican Republic had a quake which measured 3.8 on the Richter scale.    Dr. Clerveaux admitted that earthquakes are peculiar for the TCI, but a study reveals a moderate chance for earthquake activity.  The aftershocks from Haiti, she says, in 2010 proved it.   “After the Haiti earthquake, they had over forty five aftershocks, and aftershocks were reported in Grand Turk and South Caicos which resulted in the Turks and Caicos being under a Tsunami watch.  So that is where the who inspiration came from for us to begin to take earthquakes as a hazard seriously in the Turks and Caicos Islands.”

Among the activities this week is a table top session where the draft Earthquake Response strategy will be finetuned.  Haiti commemorates that horrific earthquake on January 12, it is said 1 million people were displaced and as many as 300,000 people died.

‘Don’t wait, be prepared’ is the theme for Earthquake Awareness Week in the TCI.