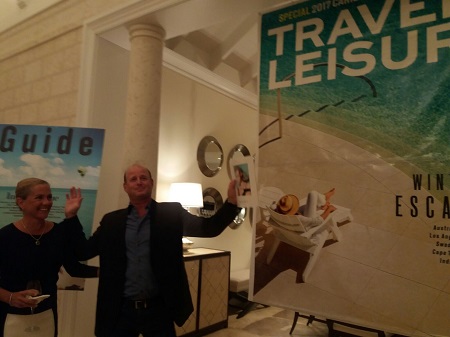 Providenciales, TCI, January 30, 2017 – Long Bay beach is increasingly becoming an internationally known destination within Provo thanks largely to the investment of the Hartling Group, which last week learned its newest resort – the Shore Club at Long Bay – made the cover of a Special Edition of Travel + Leisure magazine.

The feat, which is major, was revealed Thursday night at a penthouse suite at the Shore Club to developer, Stan Hartling; Mr Hartling says it was a fantastic surprise.  “They did actually surprise me, I have to admit.  Being honored by being on the cover of Travel & Leisure, it’s a dream for any resort.  To think about the amount of publications that come out in a year and the thousands of resorts world wide that are vying  for that, for a new resort like Shore Club, let alone something that we are being to daring with and the world is just responding to in such a big way, I’m excited about it.”

The Winter Escapes edition is on stands now around the world and on site to congratulate Shore Club was new Tourist Board Director, Ramon Andrews.   “Brand Turks and Caicos is alive and strong, and if an individual can arrive here, twenty years ago, and twenty years later continue to reinvest in the product, that only speaks volumes about the brand, but volumes about the economy and the climate within Turks and Caicos.  So we salute you Stan and we hope that this is not the last project by the way.”  Andrews confirmed that this is a big deal for Long Bay, the biggest exposure to date for the popular kite surfing beach in eastern Provo.

The Hartling Group family of resorts was on hand including Pierre Beswick, Mona Beeson and Karen Whit.  “We certainly had our work cut out for us to try and develop a different identity in a different part of the island.  But I think now gracing the cover of an international magazine such as Travel & Leisure on adds the sizzle and the excitement of Long Bay Beach.”

Congratulations to Shore Club which began taking in guests since mid December.