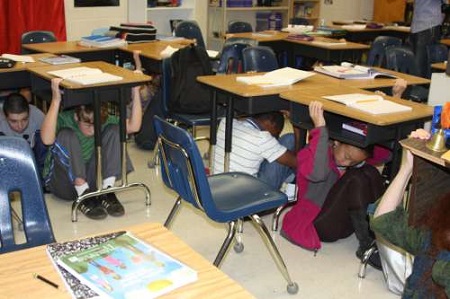 Providenciales, TCI, January 13, 2017 – Earthquake Awareness Week did more than host activities in Providenciales; in a rare opportunity the Department of Disaster Management and Emergencies visited several other islands with the message of Drop, Cover and Hold – its what you do if an earthquake hits.

On Thursday though, it was a series of scenarios as the DDME welcomed stakeholder input in the aim to develop a national plan for handling an earthquake event.  Kayana Bowen of the DDME called it a worthwhile exchange;  “It’s very heated right now at the moment, because persons are saying that they have a command, they know what their role and responsibility is, however, when you actually come to the table and faced with the situation you realize that you’re stumped.  So the good thing about it is we have other stakeholders around the table who are providing feedback, giving them ideas who are discussing what are better ways to approach things and do things to make sure they respond effectively.”

As many as 25 stakeholders were represented at the session held at the DDMEs office.   Thursday, January 12 also marked the seventh anniversary of the earthquake in Haiti, which some had reported was felt even here in Providenciales at the time.   The TCI was put under a tsunami watch in 2010 due to the quake in Port Au Prince, which killed nearly half a million people and displaced one million others.