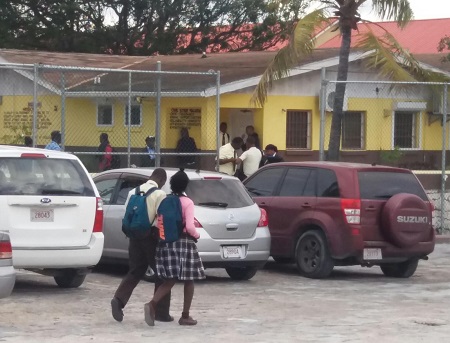 Providenciales, TCI, January 9, 2016 – Turks and Caicos to get into the low 70s today for a welcomed cool down say some, with windy weather, rough and high seas and intermittent showers all in the forecast as parents bundle up their children for a first day back to school for 2017.

A cold front literally putting the freeze on cities throughout North America has decided to travel south of the continent and several island nations in the region are experiencing a drastic cool down.  In Grand Bahama, the winter storm affected the infamous fishing hole road; the swollen creek water flooded the only link between Freeport and West Grand Bahama; it was reportedly closed down for some hours but is reopened now.

Grand Turk will be the warmest today in the TCI, with temperatures in the mid 70s; Providenciales is forecast to be 73, and that is the high with winds gusting up to 36mph – so the wind chill factor will make it even cooler.

One report to Magnetic Media said the American Airlines Flight coming into the Providenciales International Airport on Sunday evening had a rough and scary landing due to the high winds; temperature got to 67 overnight.

There is also caution for small craft and to swimmers, as the there is possibility for rip currents.