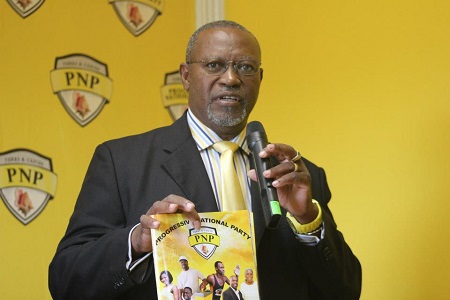 Providenciales, TCI, December 22, 2016 – In what was reportedly a highly contentious process early on Thursday, the PNP has returned Royal Robinson to the House of Assembly following a seven year break for the former North Caicos MP.  Robinson, National Chairman of the Progressive National Party confirmed to Magnetic Media the appointment today and said his name will also today be communicated to the Governor’s Office.

Significant reports of bitter infighting are emanating from the PNP party which was suddenly left leaderless when Rufus Ewing resigned the post and from politics just hours after hearing, officially, that his party was defeated at the polls.  Ewing fell way short himself; not garnering enough voter support to be returned to Parliament.

Dr. Ewing last Friday called it a clear sign that the People wanted change and he promptly bailed out; revealing no succession plan as he sat solo at a press conference at the PNP Headquarters.  It was a startling move.  Now, one week following voting day, the PNP has still not announced a plan to rebuild its party leadership, but the Opposition is now set with its representation in the House of Assembly.

With five members of Parliament; Hon. C. Washington Misick as Leader of Opposition business and their appointed member now selected, the PNP is ready for the historic Opening of Parliament next Thursday.