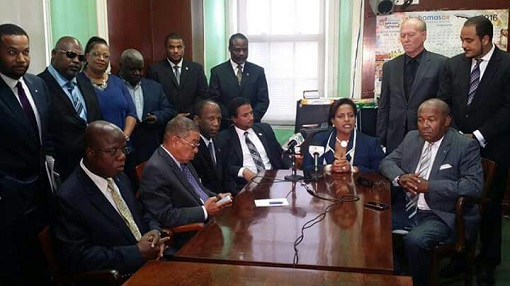 Nassau, Bahamas, December 12, 2016 – The Bahamas has a new leader of opposition business in the House of Assembly; her name is Loretta Butler Turner and she was on Sunday sworn in by Governor General, Dame Maguerite Pindling.

Butler Turner and others formed a coup, which on Wednesday forced Hubert Minnis, the actual leader of the FNM, potentially out of  the position due a constitutional right for them to claim no confidence in him and see him ousted.

Hubert Minnis remains leader of the Free National Movement, but is no longer leader of Opposition business in the House of Assembly.  There was also upheaval in the Senate as most of the FNM Senators had resigned following the move late last week.

Late breaking info from the Bahamas right now is that Butler Turner, has made Branville McCartney of the DNA the leader of government business in the senate.