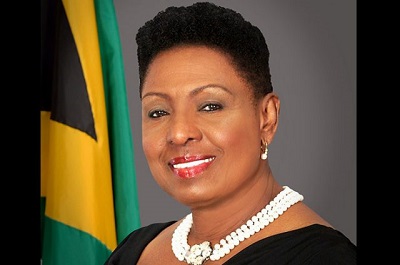 Kingston, Jamaica, December 23, 2016 – Minister of Culture, Gender, Entertainment and Sport, Hon. Olivia Grange, says the Government will not back down on its campaign for reparation for the injustices of slavery.  “The policy direction is clear, and we will continue to see through campaigns and initiatives being undertaken by the National Council on Reparations (and will take) strategic steps towards honouring our foreparents,” she adds.

In a message read by Principal Director of Culture and Creative Industries in the Policy Division of the Ministry, Dr. Janice Lindsay, for the 235th commemorative anniversary of the Zong Massacre at the Institute of Jamaica (IOJ) on December 22, Miss Grange spoke to the value of the recently revamped reparation council.  She said the Zong Massacre, in which 133 enslaved Africans were murdered while being transported to Jamaica, highlights the need to right the wrongs of the Transatlantic Slave Trade, through the work of the council.

Miss Grange said the story speaks to the essence of democracy, to the reach of a superpower over a small State, to human rights, decency and justice.  At the start of its voyage from Ghana (West Africa) to Jamaica, the slave ship, Zong, was loaded with 442 enslaved Africans. By the time the ship docked in Black River, St. Elizabeth, 133 Africans had been thrown overboard, supposedly to ward off illness and prevent a perceived threat of low water rations.

The story took on added significance when the ship owners made an insurance claim on the basis that their cargo had been destroyed, which created a controversy at the time.  The ensuing court case brought to light the atrocities committed against enslaved Africans on the voyage, and led to public awareness about the slave trade, which furthered the anti-slavery sentiment.  No criminal charges were ever brought against the crew of the slave ship for the massacre of the Africans, despite lobbying efforts of the abolitionist community.

In 2008, a monument was erected in Black River in honour of the 133 Africans. Ms. Grange gave instructions for the monument to be adequately maintained by the relevant authorities.  “We will need to ensure that this element of Black River’s history is adequately documented,” she said.

The Minister also urged the various culture agencies, namely IOJ, the Jamaica National Heritage Trust (JNHT) and the Creative Production and Training Centre (CPTC), to collaborate in conducting research and producing diverse works to engage the public. She said the National Council on Reparations can benefit from ongoing research and material with which to engage the public.  “In this information age, we have many options to produce, package and disseminate information. Not only will it be richer for edifying our people, but we will develop the weapons necessary to fight for the rights of those who went ahead of us,” she said.

The Council was set up to receive submissions, hear testimonies, evaluate research and carry out public consultations with the aim of guiding a national response to reparations. It is also to present recommendations for diplomatic initiatives, security considerations, education and public information required to guide the reparation process.

Meanwhile, Political Ombudsman and attorney-at-law, Donna Parchment Brown, urged the Jamaican public to take lessons from the circumstances surrounding the massacre, by looking at how Parliament can be used to legislate on issues of social justice as well as how the political leadership can be best engaged in such issues.