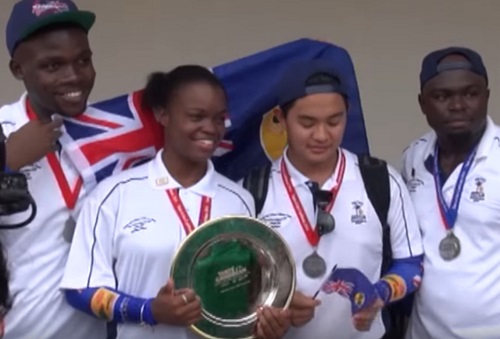 Providenciales, TCI, June 13, 2016 – Two golds, at least three silver and honorable mentions were the prizes for the TCHTA Culinary Team TCI.  The group returned on Saturday from the Taste of the Caribbean chef showdown in Miami and starring was the country’s own, 19 year old Robinangel Simons, the overall Jr Chef winner, getting the Gold and Robinangel is now an inductee into the Caribbean Hotel and Tourism Association’s Hall of Fame.  “Even our presentation on our buffet for the taste of the islands blew away every other country.  But for a young  woman to bring back Junior Caribbean Chef of the Year for the whole Caribbean, is out of this world.”

Another gold was secured by islander, Chef Joseph Charles with his seafood preparation; Chef Charles said while the other teams had an artillery of gadgets to out cook one another, for Team TCI it was pure hands and heart. “Other guys brought vacuum packs, they brought microwaves, all we had were just knives, all we had were these (hands), and it’s just for what we’ve been doing here, and these guys were preparing from the last competition as they went back home, and they said this, they said the moment they went home they started preparing for this year.  We did six weeks.”

Colin Watson, team leader said TeamTCI showed remarkable discipline, always getting into position first, with the cleanest kitchen and allowing flavor to be the difference in their culinary masterpieces.

A teary-eyed Stacy Cox is one of the founders of the Hospitality Adventure, junior chef program and said the welcome home was the icing on the cake.  “This has been something that I’ve been trying to do for the past three years now.  We’ve started from fact finding missions with CHTA to going and just scoping it out for two years to three years consecutively, and to have a team go in with less than two months of practicing and coming out so victorious.”

Turks and Caicos also earned Silver in beef, Silver for Bartender and honorable mention in dessert and dessert presentation.  Scores showed up at the airport, including Robin’s family, the Beaches Resort Family complete with Elmo and Cookie Monster, We Funk Junkanoo was there and Minister of Tourism, Heritage and Culture, Hon Porsha Smith who assisted the welcome reception complete with red carpet.   The media was out in full force too.