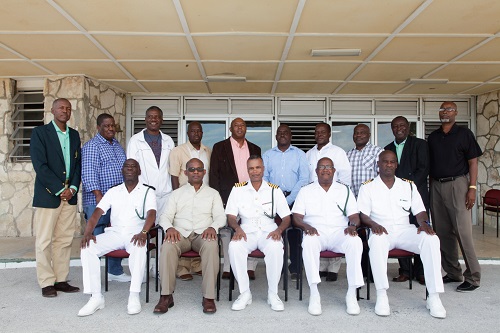 Coral Harbour Base, 27 Nov. ‘16 (RBDF): Members of the Royal Bahamas Defence Force showed their gratitude yesterday in grand and traditional style, during their Thanksgiving Service and Career Transition Luncheon. 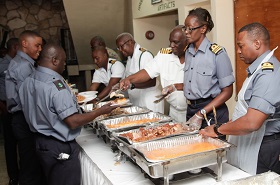 Using the day that Americans observe as Thanksgiving, ten recently retired or ‘transitioning’ veterans of the Force–as they were referred to by Commander Defence Force (Acting) Captain Tellis Bethel in his address to them–were the honored guests at this year’s event.

Captain Bethel and senior officers were on hand to greet the honourees as they arrived at Coral Harbour Base.  The men and women of the Force listened intently as some of their comrades sang, recited and offered sincere excerpts from their grateful hearts. Captain Clyde Sawyer, as well as heads of departments also expressed their gratitude for the dedicated service by those who had completed their tenure of service in the Royal Bahamas Defence Force.

Permanent Secretary in the Ministry of National Security, Mr. Carl Smith, was also in attendance.  He offered thanks on behalf of the Minister of National Security and the staff at the Ministry to both the retired and current serving members of the Force for their dedication and commitment to safeguarding our national heritage.  The honorees were presented with commemorative plaques on behalf of a grateful force for their many years of contributing to its growth.

Captain Bethel thanked the organizers of the event.  He also revealed several projects that are being undertaken to make life easier for its retired veterans, including a 401(k) modeled pension plan, military funeral privileges, veteran IDs and a skills database where employment contracts can occur. 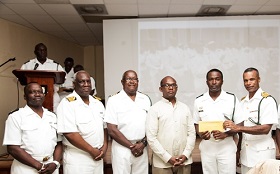