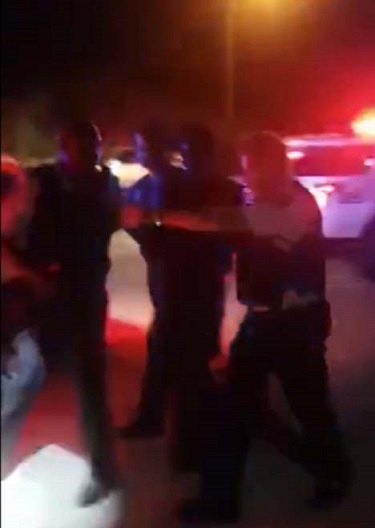 Providenciales, TCI, November 15, 2016 – Blue Hills has again helped to take crime off the streets and out of their neighborhood; a would be robber was tackled to the ground and held, by residents, at a popular store until Police arrived on the scene; it happened last night.

They say the man is from Kew, North Caicos and his photograph is floating all over social and mobile media but most striking was some amateur video which showed officers, including Commissioner James Smith carting the man off, stuffing him into a Police cruiser and the shouts from residents as they did so.  There were lots of expletives, but in the mix of the cursing were words of undeniable resolve as people rallied around the cry and against the attempted theft at what is known as the African store on Millennium Highway.

We’ve posted a clean version of that video at Magnetic Media Fanpage on Facebook where you can hear residents shouting, “What!!! Carry that bouy, carry him, let’s beat him, thief, thief, come all the way from down the road, to come down here, carry this dude boy!!”

Police are hailing the bravery of the residents and encouraging communities to remain united against crime.  Saturday Shooter wanted by Police, escapes into Kew Town again.  Police are hoping that these anti crime stances will also help them get to the bottom of a situation in Kew Town around 3:30am Saturday after they had to shut down the La Familia Bar.

A man, standing some distance from the Police, reportedly fired shots at them and hit several cars with the stray bullets.  Press Officer, Kevin Clarke said Police opted not to return fire because the area was buzzing with civilians, who were also scrambling to get out of the way the gunfire of that lone man.

The man was wearing black, ran off into bushes and got away.  Police need help in identifying this man so if you were at the La Familiar Bar and know something, call 1 800 TIPS that’s 1 800 8477; where you can give information anonymously.