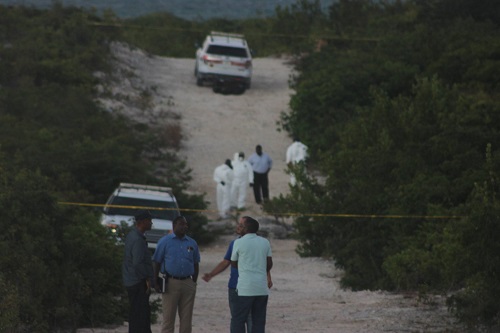 Providenciales, TCI, July 14, 2016 – The Holy Bible, which most in the Turks and Caicos hold onto as key to their faith life says that God does not give a spirit of fear; but He gives the spirit of power and of love and of a sound mind… and so people know that it is from an evil place that the swelling fear, the obvious disregard for human life and the loss of a peace of mind is coming… the sinking emotions, shock and grief for what was done to young Sorineida Morena Arias, here in these Turks and Caicos Islands is weighing heavily on the country as her partially burned, almost naked body was found dumped in bushes off the North West Point road.  The Dominican Community created several search teams on Tuesday and it was one of those teams that found Sorineida yesterday evening.

Police were not with the teams, and so when the body was found there was a photo taken and that photograph is being widely circulated now.  It not only confirms the death of the woman who worked at the Downtown Gaming Parlour but how cruelly she died at the hands of what most are suspecting is a career killer.  The DR Community said they felt alienated by the Turks and Caicos, as hardly anyone from the islands joined them in the hunt for the mother of two, who was also the breadwinner for the family where her mother is ailing.

Shirley Calcano, a Grand Turk native married to a Dominican was outraged and called on local officials in particular to do better.

“We would have thought that we had more persons looking for this young lady, but in fact it was just the Dominican community who got together and they decided that we are going to comb every area.  So they went out yesterday, they went out early this morning and they went out this afternoon.  In fact they were the ones to find her, and this shouldn’t happen because I remember I was in the Dominican Republic and when Mr. Howell went missing, I understood that the masses went to search for him, so as a Turks and Caicos Islander married to a Dominican citizen I am also concerned you understand, because we can’t say that only Turks Island lives matter. Of course I love my people, I love my country, but we have persons living among us, and all human beings matter. So I think that our government, our justice system has to rise to the occasion.”

Wailing, screaming, fainting, crying, hugging and shock were all on raw display as scores waited and waited as police cordoned off the area and scoured the zone for clues to the killer.  Police said nothing to media officially last night.  Now, it is time to tell the family of the woman that she was found, but dead.  The fourth Dominican woman in the last six years and the second this year, 2016, to be murdered with the mystery, unsolved.  Sorineida Morena Arias was just 26 years old.