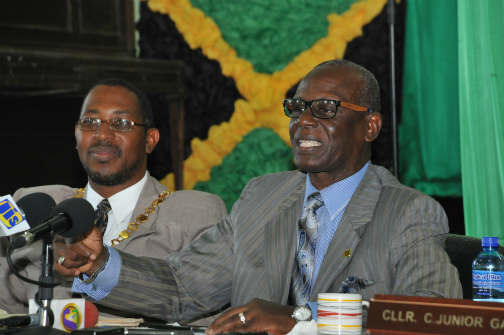 Montego Bay, Jamaica, October 24, 2016 – Minister of Local Government and Community Development, Hon. Desmond McKenzie, is urging Parish Councils to make use of all available revenue streams in order to raise funds to finance their operations.  “We are going to ensure that you become self-sufficient by using up all of your revenue options. There is just too much revenue potential within the Parish Councils that is simply going by the wayside… this is something you would want to go after more aggressively,” he said.

The Minister, who was addressing the monthly meeting of the St. Ann Parish Council on October 20, noted that Parish Councils are in possession of valuable real estate which could be utilized to significantly boost their earnings.  “All this requires is some proper management. Not only would you become more independent and self-reliant but you would also be able to create some much-needed jobs in your areas and assist in boosting the economy,” he said.

He also pointed to the need for the local authorities to improve fee collection. “The Parish Councils have the revenue source, but what you lack is the ability to collect what is outstanding. We will, therefore, be working with you towards greater management of your affairs,” Mr. McKenzie pointed out.

The Minister called on Councillors to lead by example and to show that they are indeed capable of making a difference in public service.  “A majority of Members of Parliament and Ministers came through the ranks as Councillors,” he noted. “There have also been a few Prime Ministers that once served in the Parish Councils. We have a long history and tradition of quality service,” he said.

Mr. McKenzie told Councillors that if they want people to believe in Local Government, then it is imperative that they start demonstrating the ability that, “we can take care of our own local business.  We have to be more responsible and more attractive so we can get people to recognize and respect the roles of Councillors,”  he stressed.  “We also have to get some of the younger people involved in the process.”

Following the meeting, the Minister toured the St. Ann Infirmary and the Ocho Rios Market.  Minister McKenzie’s visit to the St. Ann Parish Council is part of his tour of local authorities and municipal bodies across the island to familiarize himself with their operations.