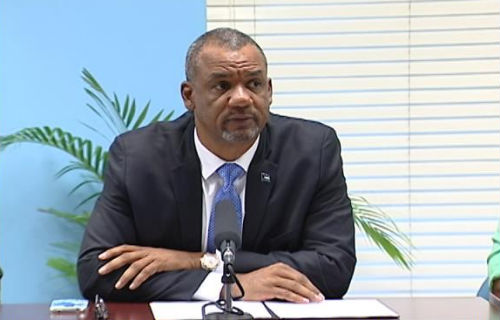 Nassau, Bahamas, October 17, 2016 – Education Minister, the Hon. Jerome K. Fitzgerald held a press conference at the Ministry’s headquarters to announce that ALL public schools in New Providence, Grand Bahama and North and Central Andros will re-open after the mid-term break on Tuesday, October 25th, 2016.  This decision comes after careful consideration and consultation with various stakeholders including Bahamas Power and Light, the Minister for Grand Bahama, the Hon. Dr. Michael Darville and district superintendents for the respective islands.

Ministry of Education officials met with Bahamas Power and Light this morning for a status update on the restoration of power supply to schools.  Minister Fitzgerald stated, “To a great extent, the re-opening of schools is contingent on power being restored to our campuses.  Most of our schools rely on power for water supply.”

According to the Minister there is still a limited number of schools that have had power restored.  “At present only 25% of schools in New Providence have power and following our meeting with BPL this morning, based on the feedback we received, only 50% of our 56 public schools should have power restored by end of day tomorrow.”

Minister Fitzgerald stressed the importance of BPL giving schools due attention.  “I am urging Bahamas Power and Light to realize that the restoration of power to our schools is absolutely essential.  We have tens of thousands of students in New Providence whose return to schools depends on BPL’s ability to restore power.”

Yesterday’s heavy downpours in New Providence also caused setbacks as contractors who were engaged to carry out repairs were unable to carry out any restoration work as scheduled.

It was noted that two important meetings for parents will be held on Wednesday October 19th, 2016 at 6:00 p.m; where school administrators will inform parents of the scheduling of students’ return on the 25th and thereafter.  These two meetings are for the parents of C. I. Gibson and Government High School only.  He appealed to all parents of the respective schools to attend the meetings at the following locations:

The Education Minister also encouraged parents whose students lost their uniforms and other school supplies as a result of Hurricane Matthew to make good use of Social services.  He stated, “Ms. Melanie Zonicle, Director of Social Services announced that her department will provide assistance with uniforms, backpacks and other basic supplies.”  As the Ministry of Education, Science and Technology continues to work aggressively with its restoration efforts, safety remains their top priority.  They are working closely with Ministry of Works and have also assigned electricians to inspect each school prior to and during the electrifying process.

Minister Fitzgerald concluded the press conference by thanking the public for their patience and understanding as the Ministry of Education continues to work diligently to ensure that students return to school in the shortest and safest time possible.