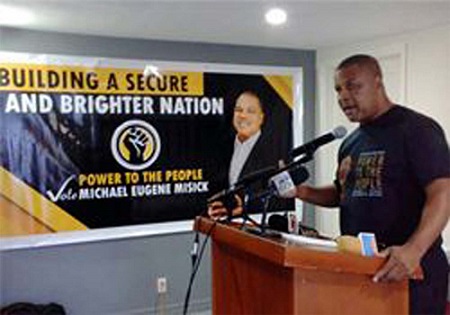 Providenciales, TCI, June 30, 2016 – Michael Eugene Misick is not forming a new political party but Michael Eugene Misick is running in the next General Election and not as a candidate endorsed by his party the PNP.  In a press conference held yesterday at the Alexandra Resort, the ex-Premier explained that he was intentionally barred from participating in the At Large race by his PNP which did not include him on an official list issued earlier this month.

A meeting was had with the party Leader, Rufus Ewing and the party national Chairman, Royal Robinson he says, but they could not settle the issue and now, Mike is on his own but says he is still PNP.

There was no major issue left untackled by Misick; he had criticism for the scholarship spending, which he labeled as too skinny and restrictive.  “Our scholarship budget was, anywhere from between twenty and at one stage thirty million dollars a year.  Today it’s around one million dollars a year, it’s not acceptable.  We have more children coming out of school, and some of them are doing a lot better, and no scholarship.”

He is not in agreement with the top police officers on the Royal Turks and Caicos Island Police Force being from the UK.  “It is completely unacceptable, that the three highest ranking officers in the police force are English.  When I was Premier, and if I am Premier, this would never happen.   When I was Premier, there were no Englishman in the police force,  the way they might have come was as an adviser.  And so we go back to the stage where we, and there is a number of talented young persons in the Turks and Caicos Islands, who are in the force, who must be given the opportunity to become Commissioner of police and Deputy Commissioner.”

He also said the government is not tough enough on crime; not creative enough with establishing institutions like a technical school or an outright tourism college.  And though he had the chance to do many of these things himself while in office from 2003 to 2009, in response to a Magnetic Media question regarding that he said, his administration ran out of time, expected to have two more terms after their 2007 victory at the polls and was interrupted by the British.

He also said the British lied to the country about the reality of national debt.  “Do we look broke, we weren’t broke then.  When I left office, the Turks and Caicos could never be broke.  When I left office we left a debt of seventy five million dollars, seventy five million dollars we left a debt for, and this was after two hurricanes, hurricane Ike and hurricane Hanna, which was a tropical storm but also damaged the islands.  So at the ending part of 2008-2009, we were recovering, because as you know when the hurricane came,  there were three of four months without a revenue coming in where we spent millions of dollars in hurricane aid and we had zero from the British, so the colonizer always says that.  They had to say something in order to justify them bringing in hundreds of English people to work during the interim administration, the fact that they intervened, the economy died, and so they had to prop up the economy, and they borrowed money, we were not broke.”

Interestingly, Michael Misick said that if he were needed by the PNP in order for his party to hold government in another tight election race, he would reconnect for the cause.